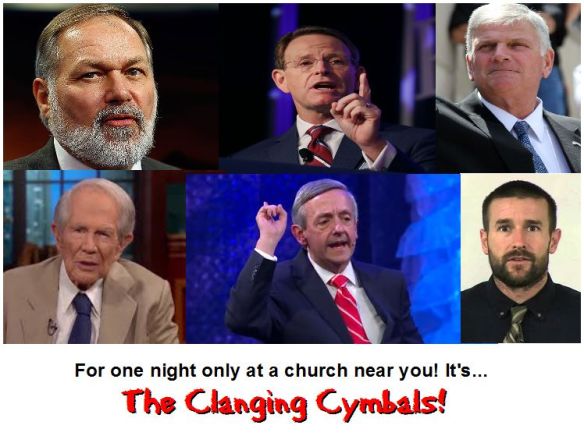 If I obsess about religious liberty but do not have love, I am no more than a resounding gong or a clanging cymbal.

If I judge and denigrate others and do my utmost to suppress them then I have not love.

If I claim I am persecuted while persecuting others, if I try to supplant their morality with my own and have not love, then I am nothing.

If I condemn others to hell because they do not subscribe to my beliefs, but have not love, then likewise I am nothing.

If I give nothing at all to the poor and say it is their own fault anyway, then I am without love.

If I say it is not up to me to fight for social justice and make defending Christian dogma my priority above everything else but do not have love, I am nothing.

Love is patient, love is kind. It does not envy, it does not boast, it is not proud. It does not dishonour others, it is not self-seeking, it is not easily angered, it keeps no record of wrongs. Love does not delight in evil but rejoices with the truth. It always protects, always trusts, always hopes, always perseveres.

If what I have, what I espouse, what I use to beat you with is none of these things then it is not love and I am a hypocrite unworthy of your attention.

The current line-up of The Clanging Cymbals is Scott Lively on Resounding Gong, Tony Perkins on Empty Vessel, Franklin Graham on Smug Tone, Pat Robertson on the Befuddlement, Robert Jeffress blowing his own trumpet and Steven Anderson contributing Heavy Flatulence.

Other members of the band are available for Self promotion, Church socials and Bar Mitzvahs. Pride events are excluded.

A few days ago, notorious God-botherer and TV evangelist, Pat Robertson, said on his TV Show that churches should revise Jesus’ stern teaching about divorce to better fit modern sensibilities. As today’s Christians divorce at about the same rate as non-believers, old Pat thinks it a mite inconvenient that they should feel guilty about it. He reminded his viewers that Jesus gave the church authority over all things and that it should therefore amend Jesus’ teaching. That’s amend as in ‘ignore completely’.

Which is fine, I guess, if you take the same approach to everything else Jesus said. That way, Christians would be safe to ‘amend’ his commands about feeding the hungry, visiting the imprisoned, healing the sick, turning the other cheek, welcoming the stranger, going the extra mile, forsaking possessions, relinquishing wealth, giving to everyone who asks, not judging, putting themselves last and others first, loving their neighbour and enemies alike… and so on.

But wait – they do that already, don’t they? Most Christians don’t practise these things. They don’t see these commands as applicable to them. They work hard, and unconvincingly, at interpreting his words as metaphorical – ‘he didn’t really mean give everything away because where would that leave us?’ – or claim they’re being taken out of context, or insisting they have a spiritual meaning…

Which is to say, nothing Jesus said is to be taken literally, even though the most straight forward reading of his pronouncements is that this is how he meant them. It’s how his early followers, the people who preserved or created his words in the gospels, understood them. Why record them otherwise?

But Jesus’ moralising is inconvenient, impractical, exacting, extreme; ridiculous, in fact, and Christians know this. Still his commands must be dealt with somehow. So the Righteous™ work round them – like Robertson and the teaching about divorce – or they ignore them completely and replace his priorities with ones of their own: worshipping him; defending his reputation; striving for power; complaining about secular society; promoting aggression; acquiring wealth; trying to control others’ behaviour; interfering in others’ sex lives; suppressing LGBT people; arguing that religious rights trump those of minorities; opposing abortion.

None of these figured on Jesus’ agenda. Some are in direct opposition to what he’s made to say in the gospels.

When we see Christians doing the things Jesus tells them they should be doing, maybe then we’ll listen to what they have to say. When they demonstrate credibility rather than hypocrisy, maybe they’ll have earned the right to be heard. But as there’s not much chance of that happening any time soon, it’s way past time we ignored them, and their superstition, in much the same way they ignore their Lord and Saviour™.

An open letter to loving Christians* who, in my lifetime, have told me that –

I want to destroy Christianity, society, the family, marriage and lives;

I’m indistinguishable from a paedophile or someone who practises bestiality, a sinner, an animal, a ‘sodomite’, a predator, an abomination and a ‘fag’ deserving only of death;

I’m in rebellion against God and need to be cured;

I’m responsible for hurricanes, tsunamis and other extreme weather conditions and am capable of bringing God’s wrath and judgement to the Earth;

I’m conclusive proof that these are the Last Days.

I’m none of these things.