Five more ‘arguments’ offered by Christians in defence of their insupportable beliefs:

You’re not entitled to speak because you have no objective basis for your morality; morality comes only from God/the Bible.

Except it doesn’t, of course; moral codes existed long before the Bible or even the invention YHWH, who is, in any case, morally bankrupt. This ‘most unpleasant character in all fiction’ ‘wallows’, if I might borrow the term, in genocide (1 Samuel 15.2-3 etc) and slavery (Leviticus 25.44-46; Exodus 21.20-21 ); he relishes the death penalty for the most minor infringements of his petty rules (Leviticus 24.16; Deuteronomy 21.18-21, etc ad nauseam); fails to keep his promises (Genesis 17.7; Mark 11.24); does nothing to relieve human or animal suffering and lets millions of children die needlessly, year in, year out. It just doesn’t suit his mysterious ways, apparently, to behave like any halfway-decent human being would.

And even if he were the morally-upright paragon of virtue Christians delude themselves into thinking he is, they would ignore his moral guidance at every turn, just as they do now. Ministers, priests, evangelists as well as run-of-the-mill believers are convicted every day of the most despicable of crimes (Bruce Gerenscer keeps a tally on his blog-site) and that’s before we get to the more exacting moral demands Jesus makes. Going the extra mile (Matt 5.41), loving neighbour (Mark 12.31) and enemy alike (Luke 6.27), giving to all who ask (Luke 6.30) – these most Christians simply ignore. ‘We’re forgiven, not perfect,’ they whimper, even though ‘perfect’ is precisely what their unreasonable saviour tells them to be (Matt 5.48). But then I’m probably quoting out of context again… or something.

You’ve been hurt in the past.

This weak, ad hominem response is the converse of the charge that you’re immoral; good cop as opposed to bad cop. The Christian who says this is all-seeing and all-knowing and is able to evaluate your entire psychology and personal history from a single comment you’ve made. They can tell that you’re only disputing an aspect of Christianity because obviously at some point in your past a Christian – who wasn’t really a true Christian – hurt you. Or maybe it was a church you once belonged to that let you down. Well, you’ve every right to feel hurt! But that doesn’t mean there’s anything wrong with the True Faith™ or those who subscribe to it! And so your point is neatly invalidated; you’re only responding emotionally and you’ll get over it.

If there’s no God then life is meaningless.

Used extensively by some Christian blog-sites, this non-sequitur translates as, ‘I’m not going to address anything you say. My neediness demands there’s some point to life and I’ve decided that it comes from the fantasy I’ve bought into.’ Questions of whether that fantasy is actually true (which by definition it can’t be) and whether life is meaningless without it, are never considered. Believers’ need for the delusion to be true, their fear of working out meaning for themselves and their subsequent investment in Christianity’s empty promises, compel them to hide behind what is an essentially… er, meaningless solipsism.

Unbelievers have no right to criticise those who belong to Jesus.

Haven’t we? We put up with all the nonsense Christians spout, their attempts to influence everything from elections to what we can see on TV, from their opposition to gay rights, same-sex marriage, women’s rights, abortion and adoption issues to the restrooms people can or can’t use and their judging of the rest of us as hell-bound sinners. In return, we unbelievers are perfectly entitled to hold Christians accountable. At the risk of repeating myself, do they do what Jesus tells them to? Do they turn the other cheek (Matt 5.39)? Sell their possessions to give to the poor (Mark 10.21)? Give more than is demanded of them (Matt 5.40)? Avoid judging others so they’re not judged in return (Matt 7.1-3)?

What do you think?

If all else fails (and it will) the faithful resort to an insult carefully selected from the extensive bank of Christian cliches. That way, there’s no need to engage the brain at all. God love ’em!

If you’ve ever tried discussing matters of faith with a True Believer™, you’ll know how difficult it can be; like wrestling with a jellyfish – and just about as poisonous.

So here’s a guide for the unwary; 10 of their favourite lines (5 this time, 5 next), all of which I’ve experienced more times than I care to remember.

“You don’t know your Bible!”

Point out that Jesus’ ‘good news’ was nothing like Paul’s or that they were both wrong about the Kingdom arriving in the first century and this old canard gets trotted out. Even if you quote chapter and verse, a clear indication you do know the Bible, they still produce it. What they mean is ‘how dare you quote the bits of the Bible we true believers don’t like and prefer not to acknowledge.’

“You’re quoting out of context.”

I’ve posted about this one before. Seemingly as a sceptic you have no discernment when it comes to selecting Bible verses. How ever many you reference – one or a hundred – they will tell you it’s not enough; that you’ve not, somehow, caught the true meaning of what the Bible is saying, which is, naturally, what they say it means. Unsurprisingly. quoting isolated verses is something the Righteous themselves like to do all the time…

It doesn’t matter what point you make, this will appear somewhere in the Christian’s response, followed, of course, by some random verse from the book in question. Christians seem to regard it as the ultimate clincher, the way to silence any opponent, as if quoting the bible to those who recognise neither its credibility nor its authority persuades anyone of anything.

“You’ve no right to criticise Christianity when you can’t ‘prove’ how something came from nothing/how life arose/evolution.”

It’s unlikely anyone can explain these biggies in 140 characters or a Facebook comment, but we can direct those issuing the challenge to scientific works that offer viable theories soundly based on the evidence available. Needless to say our Christian smart-Alec is unlikely to read them, claiming instead that one’s inability to comprehensively explain the Big Bang or evolution ‘proves’ it must have been – watch the sleight of hand here – YHWH.

“‘People like you’ only want to wallow in your own sin (which is why you won’t let me have my own way).”

Now I like to wallow as much as the next man, but outside the Christian bubble, ‘sin’ is a fairly meaningless concept, designed only to induce guilt in others. Which means the point of this unpleasant finger pointing is to side-step any discussion and to dismiss whatever point you might want to make. What this retort really means is ‘you have an ulterior motive for saying what you’re saying and, in any case, your inherently evil nature doesn’t entitle you to have an opinion.’ 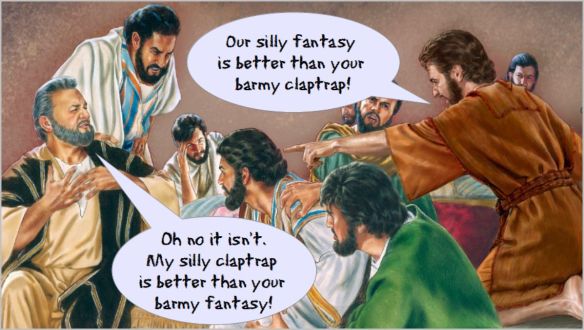 Last time, I provided evidence that Jesus’ original ‘good news’ had nothing to do with any mystical salvation plan constructed around his supposed resurrection. My six references demonstrated that, even after his death, the disciples adhered to Jesus’ original message: God’s Kingdom was coming soon and they were going to rule over it. Here are six more reasons we can be sure this was the case:

7. Our earliest sources, Q and the gospel of Mark, do not give much credence to the resurrection as an actual event: Q records no sayings of the risen Jesus and Mark has no resurrection appearances; it ends with the women who discover the empty tomb deciding not to tell the disciples about it. In Mark’s gospel, then, the disciples are not even aware the tomb is empty, let alone that Jesus has returned from the dead. We can conclude from this that the community that produced Mark’s gospel, the supposed resurrection was not significant in and of itself.

8. Paul tells us that the disciples’ gospel was not the same as his, despite the fact he too believed the Kingdom wasn’t far off (1 Thessalonians 4:17). The disciples, he says in 2 Corinthians 11.4-5 and Galatians 1.6; 2.11-21, were preaching ‘a different gospel’. Different from his, certainly, but the same as the ‘good news’ Jesus proclaimed: Jewish people should prepare for the imminent arrival of God’s Kingdom on Earth (Mathew 9.35; 15.24), when, as Jesus himself had promised them, the disciples would judge the restored tribes of Israel and rule over them. It is, as we have seen, out of the question that they would jettison this aspect of the ‘good news’, given to them by Jesus himself.

9. Because the disciples – and Jesus’ brother James – saw the new Kingdom as intended for Jews only, as Jesus had before them (Matthew 10.23), they insisted that any Gentile converts must be circumcised; must become Jewish (Galatians 2.7). Paul, of course, objected to this requirement and throws tantrums about it in his letters (Galatians 5.1-12; Philippians 3.3). But like Jesus, the disciples saw no place for Gentiles, the unrighteous, in the new age; those who didn’t convert would, of necessity, be dispatched to eternal punishment (Matthew 25.31-46).

10. As far as the disciples were concerned, therefore, it was entirely for their own good that converted Gentiles be circumcised (Galatians 6.12-13) as this was their only guarantee of a place in the new Kingdom. What this tells us is that a salvation formula, such as that dreamt up by Paul, had no part in the disciples’ ‘good news’.

11. Wherever they appear – in Paul’s writing, the gospels, Acts – the disciples are portrayed as being at odds with an incantational, faith-based Christianity. The Bible attests, even with Paul’s new religion superimposed, that they held to a different gospel, a different sense of what Jesus’ life meant and a different notion of their place in the coming Kingdom. And wouldn’t they be the ones to know? They knew Jesus, spent time with him, listened to his teaching, bought into his misguided mission and had sufficient understanding of it to spread his ‘good news’ to fellow Jews, both while he was still alive and afterwards (Matthew 10.23; Luke 9.1-2).

12. The New Testament is testimony to the failure of everything Jesus and the disciples stood for; their ‘news’ that God was soon to turn the Earth over to the meek and that they would then rule the only people who mattered, the twelve tribes of Israel, with everyone else thrown into outer darkness (Luke 13:28). Jesus himself, of course, would return at some point to be top dog, God’s representative on Earth – his anointed one. None of this happened.

If only it had been allowed to rest there, we might not know today of Jesus and his mad ideas. Instead, Paul stepped in, reinterpreted the whole ridiculous enterprise and bequeathed the world a set of different but equally absurd beliefs. And the rest is history: religious wars, pogroms, inquisitions, suppression, superstition, clerical child abuse, Pat Roberston. Is this the Kingdom that Jesus and his closest associates foresaw? Decidedly not. But it is their legacy. 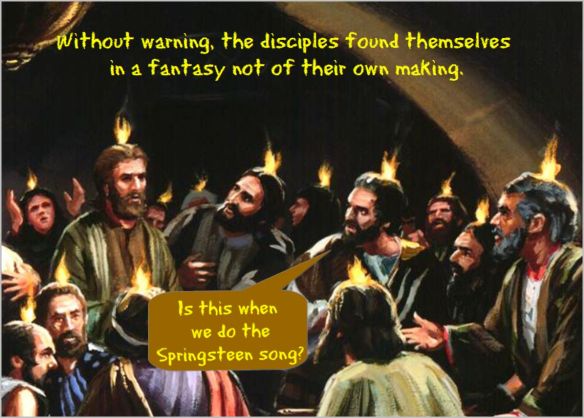 As I discussed last time, there are indications throughout the New Testament that Jesus’ original ‘good news’ had nothing to do with a mystical salvation plan. There are clues too that the disciples clung to this original message – they’d heard it from Jesus himself, after all – even as other interpretations began to supersede it.

Let’s take a look at the evidence: