I see the insects are in trouble again. Seems they’ve infected themselves with some sort of virus. The joke is they think I’m going to do something about it. Imagine! Course, it could be said that I created this virus in the first place. But then I gifted it to bats, not them. How they managed to catch it, I don’t know (and care even less) but it’s certainly running rampant through them.

Some of them think they’re channeling their thoughts up to me and that with sufficient grovelling I’ll intervene. Fat chance! I know they think I have some interest in them – one of their number even reckoned I had nothing better to do but count the hairs on their heads. Well, I have nothing better to do, but I’m certainly not going to count hairs on their heads, or anywhere else. In fact, I’m not interested in them in any way. Why should I be? Incredibly, some of them think I want to have a relationship with them. A relationship! There’s as much chance of my having a relationship with them as they have with a colony of microbes.

And while we’re on the subject, I’ve have never ever written a book. I make galaxies and nebulae, I don’t write books. They do that and tell themselves it’s me. I ask you! Nor have I ever sent any messengers to their god-forsaken planet to tell them what I want from them. I don’t want anything from them. I don’t need anything from them. I. Am. Not. Interested. There are no special ways of attracting my attention whatever any of them say. And as for the idea I have an allergy to their behaviour – preposterous! I AM God Almighty. Their stupidity has no effect on me. They offer me nothing nor do they affect me in any way.

So, they’ll have to get on with their virus on their own, as they have with every other drawback of their miserable existence. I’ll be doing nothing, no matter how much they beg. Why should I?

No gods were harmed in the making of this blog. Any resemblance to any deity imagined or dead is purely coincidental. The existence of a god or gods is not presumed by this post. In point of fact, none does. 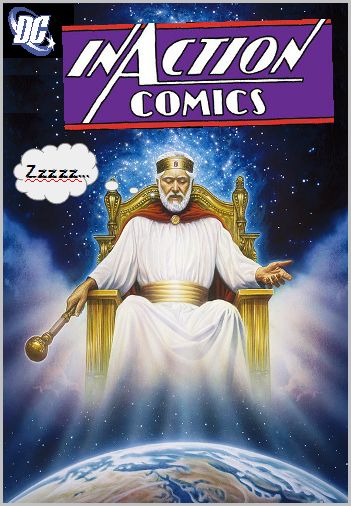 An early problem faced by the creators of Superman, only a few years after his first appearance in Action Comics #1 in 1938, was his impotence in the real world. Here was a character with incredible super-human powers – not quite as phenomenal as they would later become – who could defeat gangsters, wife-beaters, bullies and evil dictators with a flick of his little finger, but who, when a real life bully emerged on the world stage, couldn’t do anything. Stories could have been written about how he single-handedly defeated the Nazis and restored world peace but none of this would have been reflected in the real world. It’s true that today with its alternate realities and constant rebooting that Superman could be made to defeat modern-day fascism; but that would be on some other fictional Earth, not the real one. In the real world, Superman would remain impotent, having little effect beyond raising awareness and morale, which is what he did – or, more accurately, what his creators had him do – during World War II. There wasn’t anything else he or they could do.

By now, coronavirus should really have disappeared from the face of the Earth. Last Sunday was National Day of Prayer in the US. Independent of Donald Trump’s ‘initiative’ in calling for a day of grovelling in front of the Almighty, many other Christians have also been begging God to protect their church community from covid-19 (the godless can fend for themselves). Still others have commanded the virus, in the name of Jesus, to leave them and the USA alone (the rest of the world be damned.)

The effect of all this pleading and commanding has been that the coronavirus has continued to spread, heedless of borders and indifferent to the religious beliefs of its victims. Either God doesn’t give, as we say in this neck of the woods, a rat’s arse about who contracts covid-19, nor who dies from it, not even his born-again Chosen Ones. Everybody’s gotta die sometime, right? The important thing is that they’re right with the Lord before they do.

Or – God’s just like Superman. We can imagine him doing all sorts of incredible things, like healing disease, curing illness and saving the world, but in reality, none of them ever happen. He’s not going to protect people from coronavirus in precisely the same way he failed to protect them from 9/11, AIDs, the Holocaust, Spanish Flu, The Great Plague, Black Death and Leprosy. It’s not that he doesn’t care, it’s that he’s not there. He’s no more real than Superman and is every bit as impotent as the Man of Steel.

I’m a big fan of Superman – I’ve been reading the comics he appears in for 57 years now – and I’m fully aware he’s not real; he was created by Jerry Siegel and Joe Shuster 82 years ago and has been embellished by every writer and artist who’s worked on him ever since – much like God. If only those who plead with the Almighty, and worse, tell the rest of us what he thinks of us, would recognise that he is fictional too. He exists only in a fantasy realm, outside of which he has no super-powers, no influence, no ability to save us from coronavirus or anything else.

Remember the sequence in the Simpsons episode where Homer is, as usual, in lots of trouble; he looks to the sky and pleads, ‘I’m not normally a praying man, but if you’re up there, please save me… Superman.’ That’s exactly what Christians are doing right now, and the result will be the same as it was for Homer and for everyone else who’s ever called on Superman God to save them. 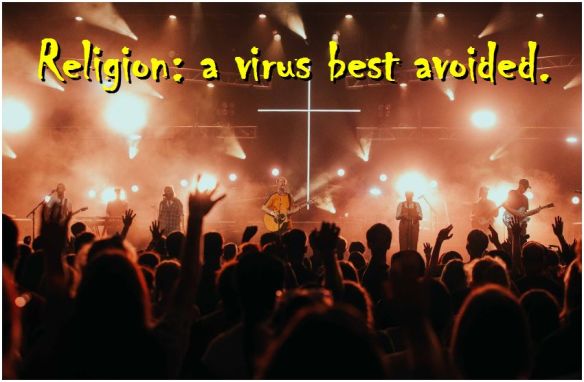 I don’t get a lot of comments on this here blog, but when I do they’re rarely as cogently argued as this one, left recently on an old post, ‘Unbelievers are Going to Hell‘:

NO OBLIVION. HEAVEN OR HELL. HOLINESS OR DEBAUCHERY, GOOD OR EVIL, VIRTUE OR VICE, JESUS OR SATAN, THE SPIRIT OR THE FLESH, GOD OR IDOLS, RIGHTEOUSNESS OR WICKEDNESS, KINDNESS OR SELFISHNESS, LIGHT OR DARKNESS, PIETY OR PERVERSION, PLEASURE OR PAIN, TRUTH OR ERROR, THE NARROW GATE OR THE WIDE GATE. THE CHOICE IS YOURS.

Difficult to argue with, I think you’ll agree. This is reasoning of the highest calibre. All those false dichotomies have convinced me I need to change my debauched, perverted ways and take on the mindset of a first century zealot. You win Watchman Outreach Evangelism!

Or, as I may have just put in my response:

Lower case or UPPER CASE
Logic or LUNACY
Reality or FANTASY
Sense or NONSENSE
Seems you made your choice already. 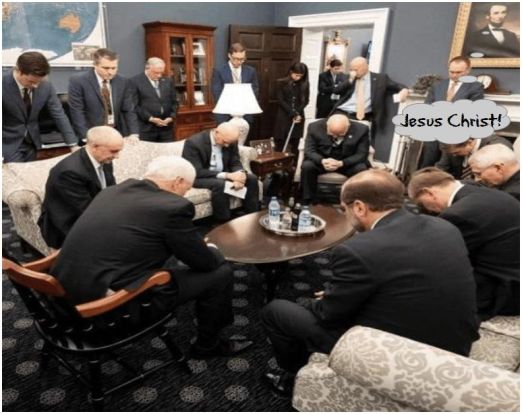 Thank God the Coronavirus pandemic is over. It was scary there for a minute or two. Over 3,000 people died from it. Fortunately, they were mainly Chinese and South Koreans. Vice-president Mike Pence and other anti-abortionists Christian leaders have now taken care of it. On Friday they prayed that it would go away and God has done as they asked. The picture above, courtesy of The Friendly Atheist, shows them doing it. Here’s some other nitwits righteous ones doing the same thing and here an article about the prophet whom God chose to announce to the world that the threat was over. You have to wonder, though, why he made the virus in the first place and why he allowed it to spread so indiscriminately. I mean, even Christians were infected.

Truly, the way to resolve a world wide health crisis is to enlist the help of an imaginary sky fairy who, as usual, does f**k all to help.

Next week: the coronavirus continues to spread. These same men of God then realise that the virus is actually God’s punishment for abortion… er, homosexuality… um, opposition to Trump… er, people shaking their fists in his face (he really doesn’t like that.) Then it all becomes clear why God made the virus in the first place. Difficult to explain why he started it off in China though, but the Lord will surely let his prophets know that too (I mean, those Chinese are commies.)

Life must be easy when all you have to do is make stuff up. It’s more than a little bit worrying that those who do it are listened to by multitudes who’ve switched off their critical faculties. More worrying still when some of these fantasists are in charge of entire countries. The only way coronavirus will be defeated is through science; the development of a vaccine, which is still many months away. Imaginary deities – and they’re all imaginary – prayers, pleading and blaming are all worse than useless.