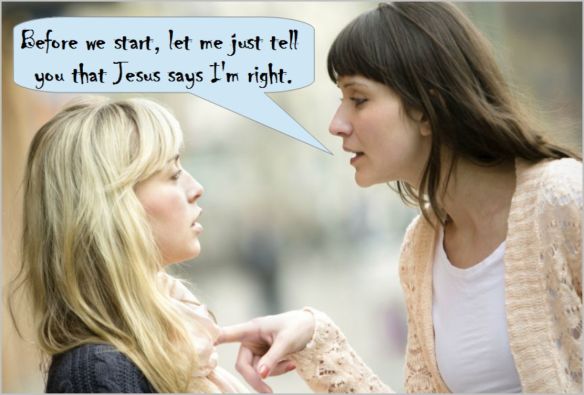 If you’ve ever tried discussing matters of faith with a True Believer™, you’ll know how difficult it can be; like wrestling with a jellyfish – and just about as poisonous.

So here’s a guide for the unwary; 10 of their favourite lines (5 this time, 5 next), all of which I’ve experienced more times than I care to remember.

“You don’t know your Bible!”

Point out that Jesus’ ‘good news’ was nothing like Paul’s or that they were both wrong about the Kingdom arriving in the first century and this old canard gets trotted out. Even if you quote chapter and verse, a clear indication you do know the Bible, they still produce it. What they mean is ‘how dare you quote the bits of the Bible we true believers don’t like and prefer not to acknowledge.’

“You’re quoting out of context.”

I’ve posted about this one before. Seemingly as a sceptic you have no discernment when it comes to selecting Bible verses. How ever many you reference – one or a hundred – they will tell you it’s not enough; that you’ve not, somehow, caught the true meaning of what the Bible is saying, which is, naturally, what they say it means. Unsurprisingly. quoting isolated verses is something the Righteous themselves like to do all the time…

It doesn’t matter what point you make, this will appear somewhere in the Christian’s response, followed, of course, by some random verse from the book in question. Christians seem to regard it as the ultimate clincher, the way to silence any opponent, as if quoting the bible to those who recognise neither its credibility nor its authority persuades anyone of anything.

“You’ve no right to criticise Christianity when you can’t ‘prove’ how something came from nothing/how life arose/evolution.”

It’s unlikely anyone can explain these biggies in 140 characters or a Facebook comment, but we can direct those issuing the challenge to scientific works that offer viable theories soundly based on the evidence available. Needless to say our Christian smart-Alec is unlikely to read them, claiming instead that one’s inability to comprehensively explain the Big Bang or evolution ‘proves’ it must have been – watch the sleight of hand here – YHWH.

“‘People like you’ only want to wallow in your own sin (which is why you won’t let me have my own way).”

Now I like to wallow as much as the next man, but outside the Christian bubble, ‘sin’ is a fairly meaningless concept, designed only to induce guilt in others. Which means the point of this unpleasant finger pointing is to side-step any discussion and to dismiss whatever point you might want to make. What this retort really means is ‘you have an ulterior motive for saying what you’re saying and, in any case, your inherently evil nature doesn’t entitle you to have an opinion.’