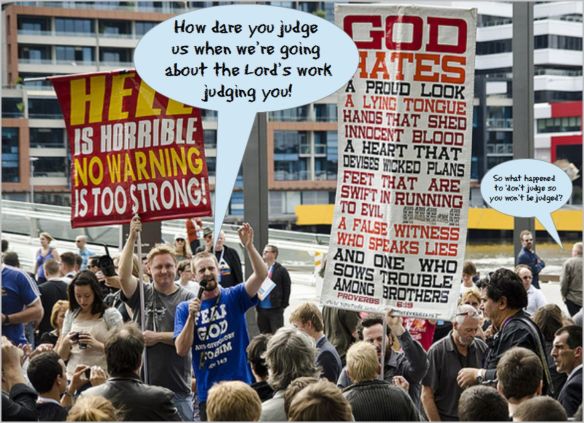 Five more ‘arguments’ offered by Christians in defence of their insupportable beliefs:

You’re not entitled to speak because you have no objective basis for your morality; morality comes only from God/the Bible.

Except it doesn’t, of course; moral codes existed long before the Bible or even the invention YHWH, who is, in any case, morally bankrupt. This ‘most unpleasant character in all fiction’ ‘wallows’, if I might borrow the term, in genocide (1 Samuel 15.2-3 etc) and slavery (Leviticus 25.44-46; Exodus 21.20-21 ); he relishes the death penalty for the most minor infringements of his petty rules (Leviticus 24.16; Deuteronomy 21.18-21, etc ad nauseam); fails to keep his promises (Genesis 17.7; Mark 11.24); does nothing to relieve human or animal suffering and lets millions of children die needlessly, year in, year out. It just doesn’t suit his mysterious ways, apparently, to behave like any halfway-decent human being would.

And even if he were the morally-upright paragon of virtue Christians delude themselves into thinking he is, they would ignore his moral guidance at every turn, just as they do now. Ministers, priests, evangelists as well as run-of-the-mill believers are convicted every day of the most despicable of crimes (Bruce Gerenscer keeps a tally on his blog-site) and that’s before we get to the more exacting moral demands Jesus makes. Going the extra mile (Matt 5.41), loving neighbour (Mark 12.31) and enemy alike (Luke 6.27), giving to all who ask (Luke 6.30) – these most Christians simply ignore. ‘We’re forgiven, not perfect,’ they whimper, even though ‘perfect’ is precisely what their unreasonable saviour tells them to be (Matt 5.48). But then I’m probably quoting out of context again… or something.

You’ve been hurt in the past.

This weak, ad hominem response is the converse of the charge that you’re immoral; good cop as opposed to bad cop. The Christian who says this is all-seeing and all-knowing and is able to evaluate your entire psychology and personal history from a single comment you’ve made. They can tell that you’re only disputing an aspect of Christianity because obviously at some point in your past a Christian – who wasn’t really a true Christian – hurt you. Or maybe it was a church you once belonged to that let you down. Well, you’ve every right to feel hurt! But that doesn’t mean there’s anything wrong with the True Faith™ or those who subscribe to it! And so your point is neatly invalidated; you’re only responding emotionally and you’ll get over it.

If there’s no God then life is meaningless.

Used extensively by some Christian blog-sites, this non-sequitur translates as, ‘I’m not going to address anything you say. My neediness demands there’s some point to life and I’ve decided that it comes from the fantasy I’ve bought into.’ Questions of whether that fantasy is actually true (which by definition it can’t be) and whether life is meaningless without it, are never considered. Believers’ need for the delusion to be true, their fear of working out meaning for themselves and their subsequent investment in Christianity’s empty promises, compel them to hide behind what is an essentially… er, meaningless solipsism.

Unbelievers have no right to criticise those who belong to Jesus.

Haven’t we? We put up with all the nonsense Christians spout, their attempts to influence everything from elections to what we can see on TV, from their opposition to gay rights, same-sex marriage, women’s rights, abortion and adoption issues to the restrooms people can or can’t use and their judging of the rest of us as hell-bound sinners. In return, we unbelievers are perfectly entitled to hold Christians accountable. At the risk of repeating myself, do they do what Jesus tells them to? Do they turn the other cheek (Matt 5.39)? Sell their possessions to give to the poor (Mark 10.21)? Give more than is demanded of them (Matt 5.40)? Avoid judging others so they’re not judged in return (Matt 7.1-3)?

What do you think?

If all else fails (and it will) the faithful resort to an insult carefully selected from the extensive bank of Christian cliches. That way, there’s no need to engage the brain at all. God love ’em!