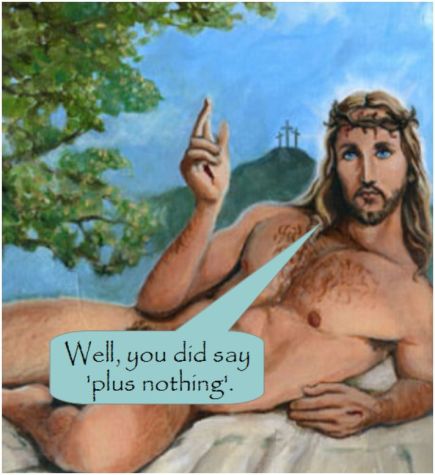 ‘Jesus, plus nothing’ is the motto – the slogan – of ‘The Family’, a secretive, clandestine Christian group that for 60+ years has influenced, and been part of, the government of the USA. Yes, poor persecuted Christians, who find their rights eroded on a daily basis (or so they like to tell us) actually exercise a disproportionate amount of control over those in power. Controlled for many years by ‘the most influential Christian you’ve never heard of’, Doug Coe, this group disregards any notion of separation of church and state. The new Netflix series, The Family, based on Jeff Sharlet’s books The Family and C Street, documents their activities, which include affecting policy both at home and abroad, and taking the gospel of ‘Jesus, plus nothing’ to the mighty and powerful across the globe, often on the taxpayer’s dime.

But what does ‘Jesus, plus nothing’ really mean? There’s no doubt it’s intended to convey a stark honesty: this version of Christianity, it says, is without all the clutter that has accrued since Jesus walked the Earth, including all of Paul’s complicated theology. The Family’s holy book is not the bible in its entirety but a slim volume simply entitled Jesus that contains only the four gospels and Acts. The Jesus story, pure and simple.

Except there really isn’t anything simple about the Jesus story. It isn’t even a single story. Nor is there one, single Jesus. (As you’ll see at the links, I’ve written about both of these problems before.) The Jesus that The Family promotes is one of its own making. Of course, every version of Jesus is a construct, loosely based, at best, on bits and pieces from the bible, but manufactured entirely by what different groups and individuals would like him to be. It’s probable that the gospels themselves are constructs built on Old Testament ‘prophecies’ and references, and that the Jesuses they portray are no more than literary creations. Even so, the Jesuses held dear by modern believers, and The Family in particular, bear little resemblance to the constructs of Mark, Matthew, Luke and John on which he is supposedly based.

He is, as one of The Family’s Christian critics points out, a talisman, a magic word that opens doors for speaking ‘truth’ to dictators and tyrants. A Jesus synonymous with power; the power to control nations’ policies, direction and morality. A Jesus who chooses his men (always men) to wield this power; a Jesus who chooses ‘weak vessels’ to do his bidding; a Jesus who, The Family is convinced, chose Donald Trump to be president. And when Jesus chooses you – or when his agents on Earth do – then you are chosen indeed. They make sure of it.