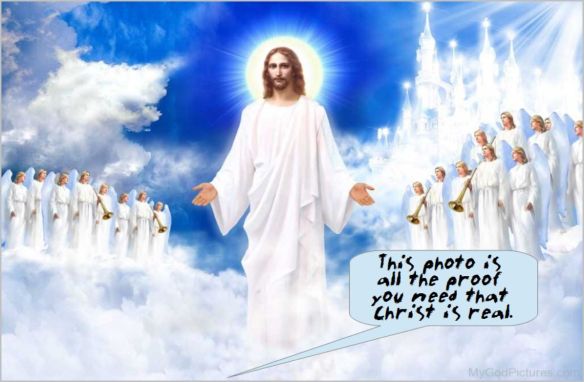 The evidence for Christ is not historical — it’s spiritual — and that evidence is indeed abundant for those who believe.

So says T. C Howitt, commenter on the Rational Doubt blog. And what is the ‘abundant evidence’, of which he speaks, for the existence of this spiritual being? It is, he says, ‘spiritual’. That’s quite a tautology: ‘the evidence for my fantasy is my fantasy’.

T.C. goes on to say that only those who truly believe can know that their experiences of the spiritual are real; the rest of us, he decrees, are blind. In other words, evidence that his fantasy is real is that other people have experienced versions of the same fantasy – some of them thousands of years ago. The ‘evidence’ for Christ (as opposed to Jesus) is therefore one’s own feelings plus the strange psychotic experiences Paul relates that he feels sure must be this supernatural being.

Science removes human subjectivity, as far as is possible, from its demonstration of how things are. All that Christians (and other believers in the supernatural) need do is similarly demonstrate that the spiritual realm, with its attendant beings, has an existence independent of human emotions, feelings and imagination. They could show us that, like gravity, electricity and quantum mechanics, Christ and angels, seventh heavens, demons and all manner of spiritual beings, have an existence separate from the internal, subjective experiences of human beings.

They’ve had two thousand years to do just this and still they haven’t. Why not? Because it can’t be done: Christ and his angels, God and his heaven are mythologies and, like all others, are constructs of the human mind.

I was asked recently by a good Christian friend, now I’m no longer a believer myself, what I ‘place my faith in’ these days. Despite the claim from some Christians – Ken Ham of Answers In Genesis, for example – that atheism itself is a religion, we atheists generally don’t have ‘faith’ in anything; we are much more interested in knowing, in evidence and in not accepting on trust whatever self-appointed authorities might tell us. Nor do we have ‘faith’ in the ‘goodness’ of man as Christian Voice’s Stephen Green tells me we do. Though we might recognise that the only way to solve the many problems we face is going to be through human endeavour; there is no god who is going to bail us out.

So in these liberating post-Christian days, my world-view differs from my friend’s and other believers’ in a number of crucial ways. This post looks at the first three of these and there’ll be three more next time. Together, these make up something of a creed for me, even if some, like these first three, are expressed as negatives:-

There are no supernatural beings.

There is no empirical evidence that supernatural beings exist. There is, however, plenty of evidence that such ‘beings’ are the creations of the human imagination. It follows from this that are no fairies, ghosts, demons, spirits (holy and otherwise), angels, Santa Claus, Satan, Zeus, Osiris, Baal, Allah, Yahweh, resurrected Christ, or God of any sort ‘out there’.

And, no, books written by human beings are not evidence of the external, independent existence of any of these characters. Such inventions bring us back squarely into the realm of the human imagination.

Neither, as Romans 1:20 claims, is the natural, physical universe evidence of a supernatural realm. To argue that it is is the same as saying that because there is an Athens there must be a Zeus, or that the existence of tea-shops proves Bertrand Russell’s celestial teapot must really be orbiting the sun. That which is material, visible and natural can never be proof of something that is invisible, immaterial and supernatural. And in the end, there is no difference between something that is invisible, immaterial, supernatural and unprovable – and that which is non-existent.

Faith is no substitute for evidence (and wishful thinking doesn’t work).

Declarations, statements and views that begin ‘I believe’ are suspect and not to be trusted. They usually mean the person uttering them has no evidence for their belief. Otherwise, why believe? Wouldn’t you ‘know’ if you had evidence? ‘Believing’ does not make the object of your belief a reality. ‘Believing’ that you have eternal life won’t enable you to live forever. Hoping you’re going to Heaven when you die doesn’t mean heaven exists nor will it get you there in the future. Having ‘faith’ in Jesus will not make you right with God for all sorts of reasons. In short, wishful thinking doesn’t work.

Science, not religion, offers the best explanations of life, the universe and everything.

Religionists (wilfully?) misunderstand the scientific use of the word ‘theory’; they insist it is a synonym for guesswork or argue that because some scientific theories, like evolution, cannot be replicated in the laboratory they are therefore null and void (see Answers in Genesis again with its battle cry of ‘were you there [when the world was made]?’ No, and neither was Ken Ham, nor the writers of Genesis, nor any deity; see above). But a scientific theory offers an explanation which can be tested against observable phenomena and processes. It asks ‘is this what we might expect if the theory (explanation) is accurate?’ If yes, the theory is validated, repeatedly. If no, the theory has to be modified to fit the facts or completely reformulated, again so it accurately mirrors what is observed. The scientific principle of actively seeking out evidence that might refute a given theory, or aspects of it, ensures a process that can be trusted. Note though, that having such trust in science is not a matter of faith: it is about considering the evidence and developing knowledge from it.