This article originally appeared as a guest post on Bruce Gerenscer’s U.S. blog, ‘The Way Forward’ a couple of months back. Bruce has since had to close his blog and as a result the article became inaccessible. I’ve rescued it, my little lost sheep among a hundred, and present it here for your delight and delectation. Or something.

While on ‘The Way Forward, the post generated quite a few comments from Bruce’s readers. Feel free to respond to it here in like manner – and indeed to any other posts. All comments, spam excluded, are published whether agreeing or disagreeing with what I have to say. 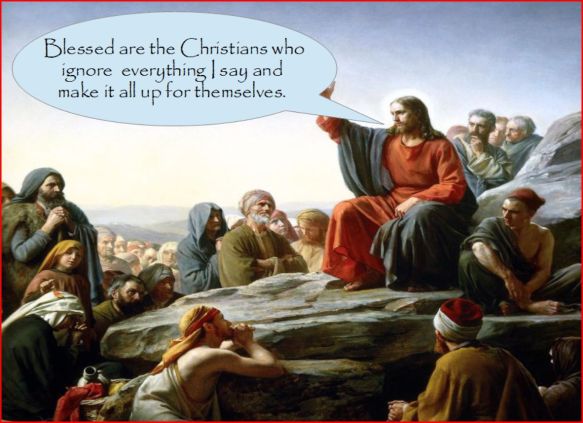 Let’s, for the sake of argument, suppose that Christians could prove that the universe was created by a supernatural agent.

Let’s further suppose that they could demonstrate conclusively that this supernatural agent is none other than their very own God, as opposed to, say, Allah or Atum or Marduk.

And then let’s say they are able to show us, with sundry proofs, that an itinerant Jewish preacher, generally known by the Greek name, Jesus – though he was never called that by those who knew him – was somehow a manifestation of this God on Earth.

Then let’s say we grant them, although it doesn’t seem it from reading Jesus’ story in the synoptic gospels (Mark, Matthew and Luke, all written between forty and sixty years after this man lived) that his death somehow or other bridged the gap between humanity and this very touchy deity.

And then let us suppose that, although he never met Jesus but only had some sort of hallucination about him, the man Paul was right to say that through magically invoking Jesus’ name, people could be reunited with God and completely remade.

Let’s further grant them that, although their book about Jesus and Paul doesn’t actually say so in so many words, they really are going to go and live in Heaven when they die.

Assuming all of this is true – even though Christians are unable to demonstrate even the first of these propositions (the one about the universe being made by a supernatural being) – why is it they disregard and otherwise ignore most of what their god-man, Jesus, tells them about how they should live their lives?

Why are they, for example, so cavalier about forgiving others when he says in order to be forgiven they must first forgive those who have offended them? (Matthew 6.14-15)

Why are they so harsh in their judgements of others when he tells them that how they judge others will be how they themselves will be judged? (Matthew 7.1-2 & Matthew 25.34-46)

Why are they so lacking in compassion, when he says the amount of compassion they’ll receive is directly related to the amount they show others? (Matthew 5.7 & Luke 6.38)

Why are they so vociferous in their condemnation of others when they should be dealing with their own ‘sins’ first? (Luke 6:42)

Why do so many of them fail to serve others sacrificially, without expectation of reward and with no ulterior motive? (Mark 9.35 & 10.43-44)

Why do they not turn the other cheek, bless and pray for those who abuse them, and treat others like they want to be treated themselves? (Luke 6.28-29 & Matthew 7.12)

Why do they not love their neighbour as themselves, and their enemies too? (Matthew 22.39 & Matthew 5.44)

Yes, they should, but they’re not, and they never have. Deep down, they know that Jesus is too extreme, too demanding. They make excuses for themselves; he doesn’t really mean the things he says; he speaks in metaphor and uses hyperbole (specially when he’s saying something they don’t like the sound of) and they invoke the bumper-sticker theology of ‘we’re not perfect, just forgiven’, even when ‘perfect’ is the very thing Jesus tells them they must be (Matthew 5.48).

The only reasonable conclusion we can draw from all of this is that Christians don’t really believe the man they call God and Saviour. Their actions, or lack of them, speak far louder than their words. It’s so much easier to claim Paul’s magical incantation, looking heavenward and damning the rest of us, than it is to do what Jesus demands. Who cares what Jesus said anyway. What did he know?