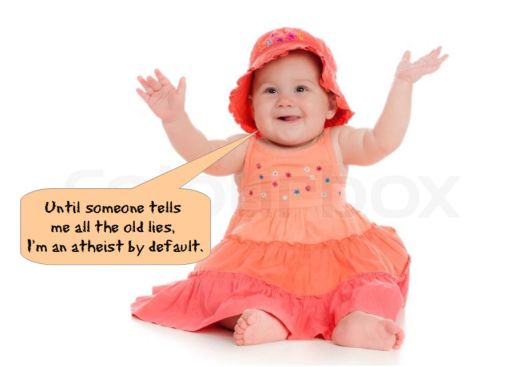 This is how a god-botherer managed to make a fool of himself recently in the i, a national UK newspaper.

It is misleading for Gwilyn Hughes to put atheism and agnosticism together as if they are the same two varieties of the same genre: they are worlds apart.

‘The fool has said in his heart, there is no God’ – the old psalm is right, for the atheist is a fool.

He ignores the thousands of centuries of human thought and experience to put all his trust in the tiny fragment of the present, embracing the myth of inevitable human progress.

The agnostic, on the other contrary, is wise: he considers everything including the present and concludes that, with the believer, its existence is unproven as its non-existence.

I sent the following reply:

As an atheist, I was interested to read that, according to Mr Toy, I ignore ‘all the thousands of centuries of human thought’ and embrace ‘the myth of inevitable human progress.’ Clearly, I’m failing as an atheist as I do neither and nor do most other atheists. Nonetheless, I’m grateful to be set on the right track by Mr Toy, who, I’m guessing from his quoting one of the bible’s most ignorant verses (oh, what choice there is!) is a Christian.

In fact, I regard myself as both an atheist, which means I see no evidence of a personal loving god and therefore ‘believe’ accordingly, and an agnostic. I do not know if there is some sort of deity ‘out there’ that gets on with his/her/its life with neither interest in, nor involvement with, the inhabitants of this planet. I doubt it, but as the possibility exists, I can only be agnostic on the subject.

I have to say I’m surprised that a national newspaper in a largely secular country allows those promoting belief in a god, however tenuously, to do so in its pages. I do hope it won’t happen again.