So in everything, do to others what you would have them do to you, for this sums up the Law and the Prophets. (Matthew 7.12: New International Version)

In everything, treat others as you would want them to treat you, for this fulfils the law and the prophets. (Matthew 7.12: NET Bible)

I went to see a performance at the Edinburgh Fringe on Saturday. Actor David Benson presented a one-man show about the Cato Street Plot, which was an 1820 plan to assassinate the British Prime Minister and government (or possibly not. It was probably a set-up.)

During the show, Benson riffed on some of Jesus’ sayings, including the one above, about how we should treat one another in a country that claims to be Christian (as Britain did in 1820). ‘Do unto others’ has become known as The Golden Rule and like most rules it is largely ignored, even (or especially) by many who profess to be disciples of the man said to have formulated it. The principle is of course much older than the gospels.

When I returned home I caught up with some of my favourite blogs and read about:

A military organisation that promotes the separation of church and state in the U.S. on the receiving end of Christian hate mail.

A preacher who thinks the comedian Sarah Silverman should have her teeth smashed before dying prematurely and being sent to Hell.

The same preacher promising that the Jews, who he says are not God’s Chosen People, will be made to bow down before male Christians, who are.

A different pastor who recited Bible verses while allegedly assaulting an under-aged girl.

The cover-up of the sexual abuse of minors by the Jehovah’s Witness cult.

Thousands of hateful messages, many from Christians, sent to Montreal Pride organisers.

They just don’t get it, do they? Being a Christian means doing what Jesus says (doesn’t it?) and he says that in everything we should to treat others as we ourselves like to be treated. Note how all encompassing that is: in everything, meaning ‘in every circumstance, with no exception’.

My guess is that the majority of Christians like to be treated fairly, with kindness and respect. I know they do because they whine endlessly when they think they’re not being. Yet so many of them won’t extend the same fairness, kindness and respect – in every circumstance – to other people.

I recently saw a slogan that said ‘Why be racist, sexist, homophobic or transphobic when you could just be quiet’; too many Christians can’t even manage that. They feel compelled to hurl vitriolic insults and threats in defence of the most powerful being ever imagined (and he is imagined). Others think that people more vulnerable than themselves, children included, exist only for their own sexual gratification. These Christians have no interest in ‘In everything, treat others as you like to be treated’. It just doesn’t apply to them.

Strike up another failure for their Lord and Saviour, Jesus Christ. 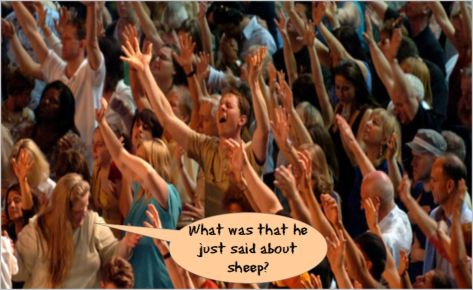 Reverend M. T. Vessal of the Church of The Raised Up here again, with the second part of my guide to Effective Preachin’. In case you missed it, repent! (The first part’s here.)

Now we’re really gonna get going, praise the Lord! The tools you’re gonna need for your talk proper are:

Lots of anecdotes (make up ’em up if you don’t know any true ones), specially ones about life- and-death situations. Stories about encounters with people on planes always go down well, as there’s always the chance the plane will too, and accounts of foolish follk who hear the gospel and ignore it, only to die in a terrible accident soon after.

Cod-psychology. That’s the stuff about God-shaped holes, how only Christ can forgive sin and meet all our needs, even though he doesn’t and never said he would. You can add something in here slagging off atheists and anyone else you disagree with.

Conviction. This is crucial. Sound as if you mean whatever it is you’re spouting. Sound as if you really know what the Bible says. Make it sound like it’s relevant and meaningful, even though it isn’t.

Modulation, otherwise known as shouting and dropping your voice. Shout when the argument is weak (and they’re all weak – you’re making this stuff up, remember)) and drop your voice almost to a whisper so that people know you’re being really, really sincere.

Drama. Pace up and down, like ‘Bishop’ T. D. Jakes, and mop your brow a lot. Wave your arms about, like Joseph Prince and show you really mean it. Maybe you could use props, like Beth Moore does, though you run the risk then of diverting the attention away from yourself. Better is to demonstrate what a cool guy you are, even if you’re not a guy, by sitting on the edge of the altar steps or, if you’re in a really cool church like Steve Furtrick’s, the Stage. This shows the congregation/audience just how cool you are.

Whipped up emotion. This is optional but if you lay it on thick about what Jesus has done for the spiritually inferior, how their sin caused those nails to be driven in, then you’re on to a winner. Aim for some arm waving from ’em, speaking in tongues and maybe even some crying. Don’t forget to tell ’em that whatever they’re feeling is the Outpouring of the Holy Spirit. Definitely nothing to do with your manipulating their already fragile emotions. No sir. This here frenzy is divinely inspired.

Finally, get to the challenge bit of your sermon/talk/self-promotion. This can involve an appeal for money. Correction: this will involve an appeal for money. The God who supplies everything doesn’t supply money so you’ll need to lay a guilt trip on your fans/congregation to provide you with the cash to continue the Lord’s work. But it’s not only about money; remember to pressurise/inspire the congregation/audience/fans to go out and harrass their neighbours so maybe they and their wallets will come to church next week. As the Lord Jesus himself said, ‘the harvest is plentiful but the labourers are few’!

Above all, though, let everyone leave feeling that they’ve had a good time. Like kettles, they should have had a real great Outpouring and feel well and truly Blessed. Leave ’em feeling ready for more, same time, same place next Sunday.