I’ve had a reply from my friendly neighbourhood Jehovah’s Witness, Jim and Sandra. Well, from Jim. Sandra seems to have left him to it. Naturally, politeness compelled me to reply to Jim’s reply.

We wanted to say thanks very much for your email. We appreciate hearing what you had to say. We hope that you and your family are well, and continuing to stay safe. We want you to know that we fully respect your beliefs so thank you for sharing them with us. But please consider what we have to say in response with an open mind.

Firstly, you may be familiar with the ‘Cambrian Explosion’ which marked the time when most of the major groups of animals first appear in the fossil record. The reason they call this an ‘Explosion’ is because of how short the period of time with which almost all animal life suddenly appears. As you mentioned with Occam’s Razor, we have found that the Bible provides one explanation as to how life got here, whereas science points to an accumulation of many different theories that even scientists themselves don’t agree on… such as Sir Isaac Newton and William of Ockham as well as many other scientists who do believe in an intelligent designer – God.

You also raised excellent points about God’s existence too, you mentioned that according to our reasoning things that are complex must have a creator. While we completely agree God is definitely complex, the Bible answers that question by saying that “From eternity [God has] existed” and “From everlasting to everlasting, you are God”. So we can see here that while God is the creator, he is not a creation. So as hard it is for us as humans to comprehend (as everything we know has a designer) God wasn’t created as he has always existed.

You also mentioned that if God created everything, this would mean that he also created viruses etc. However if we think of Benjamin Franklin, for example, he created electricity… but we would not say he was the cause of people dying due to the electric chair would we? The Bible does clearly state that God “created all things, and because of [his] will they came into existence and were created”. So while we would not dispute God did create everything, things we experience today are present as a byproduct of a situation God never intended to happen.  However this then raises the questions… What was God’s initial purpose for humans? And why does God allow suffering and diseases?

If you would like the answers to those questions, just let us know in your reply and we would be happy to discuss that with you too.  In the mean time, we found this video that we thought you would find really interesting. You can watch it for free and by all means please let us know your thoughts on it.  https://www.jw.org/en/library/videos/viewpoints-origin-of-life/irene-hof-laurenceau-orthopedic-surgeon/

And my reply. I wanted to turn the discussion round to that JW weakness – one of many – their preoccupation with Jesus’ return (or lack of it):

Thank you for your response. I hope too you are both well. I have to say I was unconvinced by your assertion that Ben Franklin created electricity – he certainly didn’t. Electricity is a natural phenomenon that humans have been interested in for thousands of years. Consequently, your analogy between Franklin and God doesn’t stand up. If God created viruses, germs and parasites (as he must’ve done if he created ‘everything’) only to let them run amok amongst the rest of his creation, then he is responsible for the outcome. You say this is not what he intended but as an omniscient being he must have known what was going to happen, just as he must’ve known in advance that Adam and Eve would ‘sin’. Yet he still went ahead and created viruses and the like, knowing the havoc they would cause. How could a loving God do that?

I have to tell you, I’m not going to be persuaded of God’s existence by the argument from design, nor by the argument – though it’s really no more than an assertion – from incredulity. It’s the one in the video clip you sent that says essentially, ‘this natural phenomenon is just so amazing I can’t understand how it came about. Therefore it must have been God.’ Similarly, for you to quote the bible’s claim that God has always existed isn’t convincing either; that some ancient tribesman and their scribes thought so does not constitute proof.

What might convince me? Possibly if the things Jesus said he was going to do had actually happened. Take, as one example, his promise that God’s Kingdom would be established on the Earth while those he was speaking to were still alive (Matthew 16:27-28, Matthew 24:27, 30-31, 34 and Luke 21:27-28, 33-34 amongst other places.) If this had happened, I’d be able to look around and see God’s plan for humankind in action and say to myself, ‘how mighty fine it is to live in the wonderful kingdom God has blessed us with these past 2000 years. He truly is real.’ But of course he didn’t, and Jehovah’s Witnesses and other branches of Christianity have been making excuses for him ever since.

I do hope you’ll read them. Feel free to explore other of my posts too. 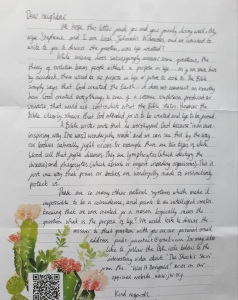 One post in and already a diversion from my planned ’12 Rules’ series. This is because I was fortunate enough to receive a letter in the post recently from my ‘neighbours’, Jim and Sandra. You can see it above. I’ve no idea who Jim and Sandra are – I’ve changed their names here to protect the guilty – but they tell me they’re Jehovah’s Witnesses. They want to convince me of their God, first by pointing out that we are, everyone of us, created by him. They then proceed to demonstrate their God’s existence with rather weak versions of the weak ‘argument from design’, with a spot of the so-called ‘argument from incredulity’ thrown in. Having ‘proved’ God, they conclude with a lovely non-sequitur, that God = purpose.

As they had gone to a lot of trouble to do this, I felt Jim and Sandra deserved a reply, specially as they were kind enough to include their email address. So here it is.

I was interested to get your letter recently. I notice you ask the question, ‘was life created?’ Of course it was! You’ll get no argument from me there. Nature and the processes of natural selection and evolution created life as we know it today. You of course want to draw God into these processes, but actually he’s not needed to explain them.

Your ‘argument from design’ doesn’t work at all, because if God created all the wonderful, intricate things you talk about, he also created viruses, including covid-19, cancer and parasites. You can’t say he created everything and then discount all the nasty things as the product of natural processes or man’s sin or whatever. Either everything was made by God or everything is the result of natural processes – you don’t get to pick and choose.

You say that only (your) God could make all the complexities of life, as complexity necessitates a creator. But that creator must, by definition, be more complex than his creation – yet you don’t think he had a creator, do you. But he must have done – because according to you, complexity has to have a creator. This principle doesn’t grind to a halt with God just because you or your church or holy book says it does.

The intricacies and complexity of life that we see are the result of organisms, including ourselves and all other life & non-life, like viruses, adapting to their environments over billions of years. That’s it – no need to add another layer of complication, like a god, to this explanation (you may have heard of Occam’s razor, which is what I’m applying here). If something complex has existed for eons it is far more likely that it is something we know for sure exists – nature – rather than something we don’t.

Life has in fact many purposes; one doesn’t need a God who doesn’t exist to discover them. I’d be happy to share some of these with you, though I imagine you are already quite set in your beliefs. That’s a shame.