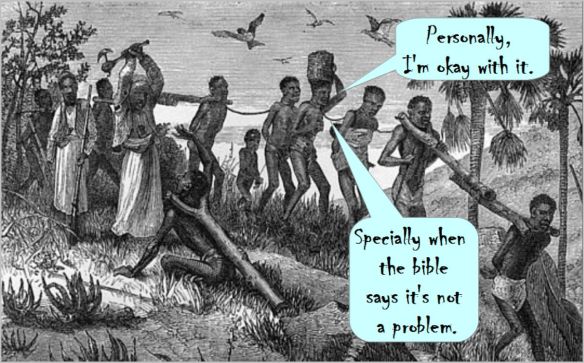 Over on his blog site, Biblical Musing, Don Camp is trying to justify why God appears to condone slavery. It’s not the first time Don has tried to defend the indefensible; he’s recently been arguing much the same thing on Debunking Christianity.

The fact the Old Testament appears to endorse the keeping of other human beings as slaves is a problem for Christians. It’s a problem compounded by the fact that Jesus in Luke 12.47-48 and the imposter-Paul, in Ephesians 6.5, both support the practice. How can it be that God approves, or at least raises no objection to it? Wouldn’t an omniscient, all-loving God have outlawed slavery, as he outlaws so much else, in one of his innumerable laws and commandments?

Instead, he provides instructions about how to keep and look after slaves; what to do, for example, when you flog one to within an inch of his life so that he later dies (Exodus 21.20-21) or when you deliberately blind your slave – she’s your property after all – or rape her (Exodus 21.26; Numbers 31.17-18).

Don’s answer is that, despite God involving himself in the minutiae of slave treatment, he knew it would be a waste of time telling his people slavery was wrong. Why? Because he took the trouble to tell them lying and stealing were wrong and yet they ignored him. So, hey, why should he bother telling them about slavery? They’d just ignore that too.

But the point is – disregarding the fact that not everyone steals and lies – ‘God’ did issue laws prohibiting stealing and lying (and eating shellfish, and wearing garments of mixed fabric). It seems it was important to him to tell his pet-tribe that these were wrong, even though he must have known many of their number, and many more subsequently, would ignore him.

What can we conclude from this? Only this: that God didn’t feel the same way about slavery as he did about lying and stealing, which is why he didn’t bother making even the same token effort to prohibit slavery.

Or, and much more likely: the tribes who wrote the laws didn’t think slavery was wrong. In fact, they thought it quite useful to have slaves. Given this utility, they were unlikely to have devised laws preventing their ownership. The enslaved themselves no doubt thought differently, but then they didn’t get to write the rules.

We don’t find a commandment prohibiting slavery in the bible because those who wrote it liked having slaves. For this reason too, we find all those inhumane instructions about keeping slaves and what should happen if you maim or kill them.

Of course God didn’t write these laws. People did. And they wrote them according to their understanding of what was moral, fair and legitimate within their own primitive milieu. Thus it was that slavery got a free pass.