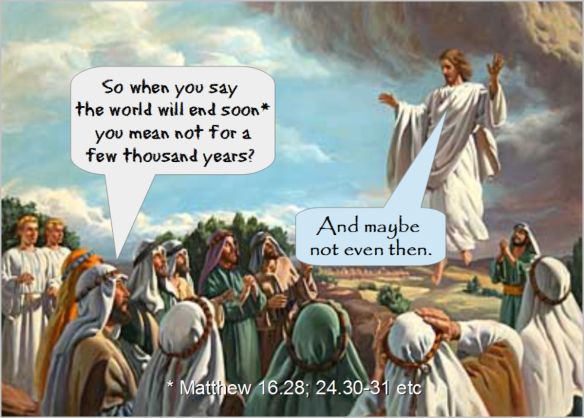 How was it for you? The End of the World, I mean. The one last Saturday – 23rd September?

What do you mean it never happened? Christian numerologist David Meade promised it would. He worked it all out from the bible and stuff, and had numbers – numbers I tell you – to prove it.

When it didn’t happen, what did Meade do next? He explained that Saturday was only the beginning of the End. Terrible stuff was going to start happening on 23rd, that would lead up to the actual end End, which is not far off.

Same old, same old. How many times has this happened before? A predicted end-of-everything that doesn’t come to pass, followed by post-hoc ‘explanations’ from those who invented the nonsense? Invariably this entails some version of ‘it was really only the beginning of the end’, even though this is not what the ‘prophecy’ claimed before it failed. It’s easy to scoff, which is what Christians themselves do when one of their number fails spectacularly to predict the End. ‘They should know,’ they say, ‘that the Lord warned that no-one knows the precise time of the End.’ (And indeed he does in Mark 13:32.)

What they fail to see is that Christianity itself is built on a failed prediction that the End was nigh, and the resulting catalogue of excuses when it turned out not to be. Jesus (or those who put words into his mouth) was clear that the End of the World was scheduled while his pals and fans were still alive. When it didn’t happen, those who came after him invented all sorts of reasons why not: ‘he meant it would be a gradual process (Luke 17:20-21),’ ‘God doesn’t see time the way we do’ (2 Peter 3.8), ‘he’s delaying so more people can be saved (2 Peter 3.9). The writer of John’s gospel, written about 70 years after Jesus lived, solves the problem by ignoring the issue entirely.

Christians today leap on these excuses to explain why the world still hasn’t ended; yet there is an unassailable incongruity between this kind of fudging and what Jesus says. He thought and taught that the world was coming to a spectacular end soon, when God would remodel it in favour of the poor, the oppressed and the righteous (Matthew 16. 27-28 & 24.27, 30-34; Luke 21.27-28, 33-34 etc). He was wrong. Paul too thought God was going to rescue his ‘remnant’ while he still lived (1 Corinthians 15.51) and he was wrong too.

When it dawned on early Christians that the world was not going to end when Jesus and Paul had said it would, they started inventing their excuses. 2 Peter 3.3 warns that there would be scoffers in the last days, an undoubted jibe at those in the early second century who pointed out how mistaken Christians and their Christ were about the End. Those scoffers had a point and, two thousand years down the line, have even more of one.

Jesus is the archetypal failed prophet of End Times. Cranks like David Meade are merely modern day equivalents, purveyors of the exact same fatuous nonsense about the end of the world. Meanwhile, nothing changes; we are still here, the world is still here and God, as is the way with a non-existent being, remains characteristically unconcerned.

4 thoughts on “The Same Old Song”