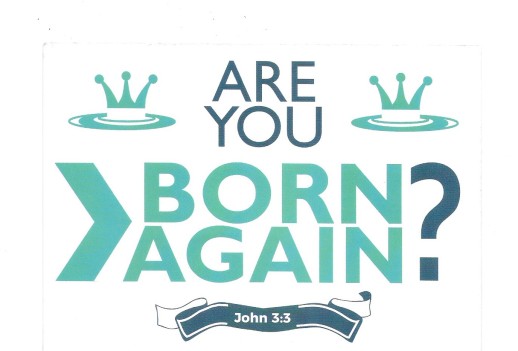 Someone handed me the above card in town yesterday. ‘Are you born again?’ No, mate, and neither are you. As Bart Ehrman shows in Jesus Interrupted, and as I’ve written about before, the story of Jesus and Nicodemus in John 3 is a literary construct (as are the gospels in general.) The pun between ‘born a second time’ and ‘born from above’ only works in the Greek, where ἄνωθεν (anothen) can mean either ‘again’ or ‘from above’ (though it’s usually the latter.) Unfortunately, it is highly unlikely Jesus spoke Greek. Here’s Ehrman:

In the Gospel of John, chapter 3, Jesus has a famous conversation with Nicodemus in which he says, ‘You must be born again.’ The Greek word translated ‘again’ actual has two meanings: it can mean not only ‘a second time’ but also ‘from above.’ Whenever it is used elsewhere in John, it means ‘from above’ (John 19:11, 23). That is what Jesus appears to mean in John 3 when he speaks with Nicodemus: a person must be born from above in order to have eternal life in heaven above. Nicodemus misunderstands, though, and thinks Jesus intends the other meaning of the word, that he has to be born a second time. ‘How can I crawl back into my mother’s womb?’ he asks, out of some frustration. Jesus corrects him: he is not talking about a second physical birth, but a heavenly birth, from above. (Jesus Interrupted, p155)

So Nicodemus is made to misunderstand Jesus, confusing ‘born again’ with ‘born from above’, and Jesus has to tell him what a twit he is. Translators of this chapter haven’t understood the point of the story either, making Jesus say, in John 3.3, ‘you must be born again’, when the rest of the narrative makes clear he means, ‘you must be born from above’ (i.e: be renewed by God who sits in Heaven on high.) 2000 years later, Christians, thanks to these translators, still make the same mistake.

There’s even more poppycock on the back of the card. The born again, it seems, avoid sin like the plague. Sure they do. Just ask all those kids molested by priests, preachers and Christian youth workers. 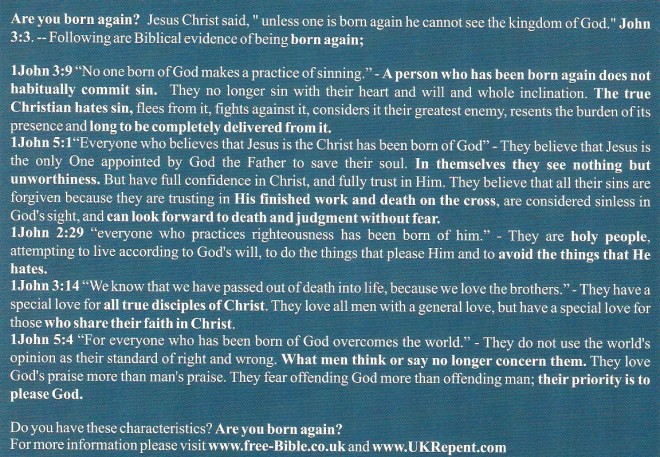