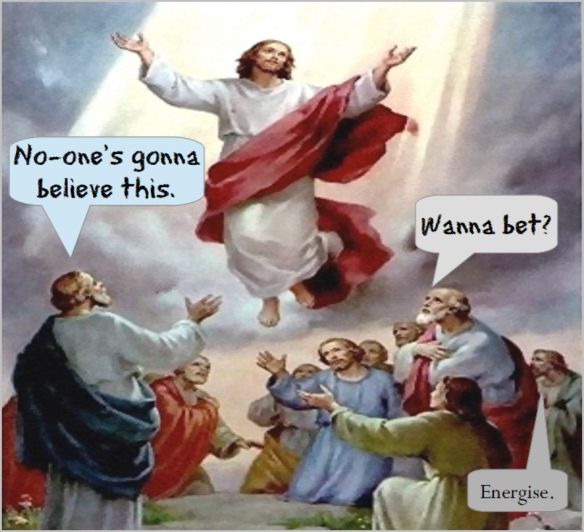 Hi, Thea Lojan here talking about the creed. Here’s what else it says, following on from last time:

I believe Jesus ascended into heaven and is seated on the right hand of God and will come to judge the living and the dead. As I was saying, Jesus could do amazing things. He could, like, beam up into the sky and out into space – that’s what ‘ascended’ means. Amazing. And he is coming back to judge the Earth, just like he promised. I know he said he’d be back real soon, like while his disciples were still alive, but to God a minute is like a thousand years so a few years can be anything like a million, or something like that. We shouldn’t take it literally when he said he’d be back while his friends were still around, though the Bible is, without a doubt, the literal Word of God.

Anyway, when he returns Jesus is going to send those who don’t believe in him to Hell, where they’ll suffer eternal torment for, like, forever and ever, amen. And he’ll take people who are saved, like me, back to Heaven with him. I can’t actually find the bit in the Bible where he says he’ll be taking me to Heaven, but I have faith so I’m sure he will.

Just a thought, but why doesn’t this creed mention the Bible, and how it’s the ineffable and literal Word of God? You’d think it would, wouldn’t you.

I believe in the Holy Spirit, the holy Catholic Church and the communion of saints. Definitely. The Holy Spirit is like the feeling of God that you get when you’re being blessed. You can’t see it – though it’s actually a ‘him’ because God is a ‘him’ – but it’s there, helping you make decisions, like whether you should buy a new car or install a heated pool in the yard. You definitely get a sense of him then. In my experience, he’s never let me down. He always guides me right.

I’m less sure of the holy Catholic Church because of course we’re not all Catholics and nor should we be when Catholics have got everything so wrong. But the pastor at church says it just means ‘the Body of Christ’ here, the same as ‘the communion of saints’ does, though that makes you wonder why we’ve got it in there twice. The communion of saints means all worshippers everywhere being united and working together. So, yes, I totally believe that because, that’s what we do as Christians; we all love each other. I don’t accept any of those lies that some people put about that there’s, like, 41,000 different kinds of churches. I don’t think God would let that happen, do you?

I believe in the forgiveness of sins. Yes I surely do, for God has forgiven my sins through the redeeming blood of the Lord Jesus Christ, his son. And if they’re really, really sorry I can forgive the sins of others, except of course if they’re, like, homosexuals. It really grosses me out to think about what so-called “gay” people do with each other. It’s unforgivable and even the Lord doesn’t forgive it. But my sins, yes, he forgives those.

The resurrection of the body and the life everlasting. Well, I already covered this. This is another repeat. What this really means is that everyone whose sins are forgiven and have been saved will go to live with God in Heaven after they die. Isn’t that amazing? Just think, whatever happens to your body all the time you’re dead, even if it’s been burnt or has rotted away to nothing, God will repair it and make it good as new. And then you’ll live forever in Heaven, because that’s what it means when it says ‘the life everlasting’. Even if I still can’t find that bit in my Bible.

Well, that’s it. That’s my creed, and what Christians everywhere believe. It was written, in fact, by the apostles, that’s Jesus’ friends, way back when he was still alive or just after. If you were to give your life to the Lord – and you really should if you want live forever in Heaven – then it’s what you’d believe too. Isn’t that, like, really, literally incredible?