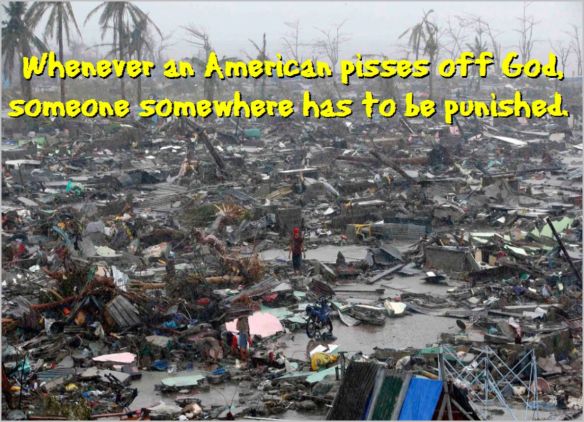 The idea that natural disasters and death are punishments from God – for whatever we humans have done to offend him – is still with us. As I suggested here, such a notion has been around from the beginnings of religious belief. It, together with its counterpart – that we need to appease the god(s) who so afflict us – is responsible for the genesis of all religion. There are those today whose thinking is wilfully stranded in the ancient world-views of ‘sacred’ texts that embody this dual notion of punishment that’s somehow merited and the need to appease the deity dishing out the punishment.

Here it is expressed recently by bear of little brain, Sam Rohrer, who has it directly from the Lord that he, the Almighty, has turned his back on America because it does not force immigrants to believe in him. America, he says has

changed the historic biblical rules (regarding immigration) … this is a reason why God must discipline our country.

Looney tune Pat Robertson, with his direct hotline to the Almighty, insists that it’s abortion that’s going to bring down God’s wrath:

One day, a righteous, holy God is going to demand an accounting for every drop of blood that has been spilled of innocent, unborn babies. And we just keep it in mind, when it happens it’s going to be awful.

Andrew Bieszad, on the other hand, knows that Hurricane Matthew which struck Florida back in August was God punishing the State for its tolerance of ‘evil sodomites’ (you don’t get much more tolerant than that.):

Stop sinning, especially with sodomy, as it is one of the four sins in the Bible which cry out to God for vengeance, which we are seeing now.

And these are just a few examples. There are many more. According to his whack-job servants, God can punish us, entirely indiscriminately, by unleashing earthquakes, tsunamis and floods; he can turn his back on us so that we wallow in our own filth; he can show his distaste for our ‘sin’ by raining down death and destruction upon us.

Naturally there’s plenty of this kind of thinking in the Old Testament, where God is credited with drowning his entire creation when a few ancient tribesmen misbehave (Genesis 6); he’s made to destroy Sodom and Gomorrah after every male turns inexplicably violent-gay (Genesis 19) and he’s said to wipe out whole swathes of his chosen people because they don’t pay him enough attention (Exodus 32.28).

None of these things happened, of course. They’re stories, myths or legends that incorporate the primitive thinking of the pre-scientific people who devised them, people who could only explain violent events in terms of divine punishment. It is this same thinking that is perpetuated today by those whose development is similarly arrested: through exposure to these same stories, an unwillingness to think rationally, an unhealthy preoccupation with God-nonsense and an overweening sense of self-righteousness (‘don’t blame us; it’s those others that attract God’s wrath.’)

There is no correlation between the disasters that befall humankind and God. Not one of the self-appointed prophets who say there is offer a single scrap of evidence that they are inflicted by a deity. Not one of their cause-and-effect assertions has ever been tested, can ever be tested. And – the clincher – there is no God anyway. All of which renders appeasement unnecessary and is good enough reason not to believe a word from these misguided charlatans.

6 thoughts on “God’s Wrath (and those who direct it)”