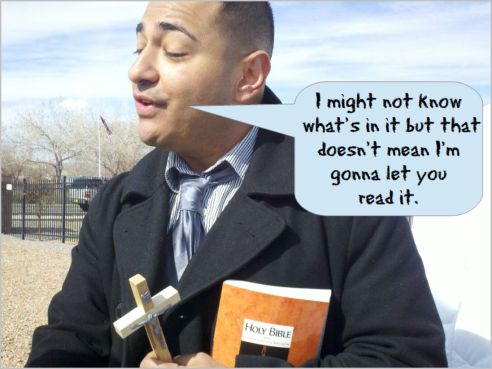 Christians have a monopoly on the Bible. No-one else should comment on it, criticise it or even quote from it. Or so Christians tell me. The reason for this, apparently, is that ‘it is absurd to contest the Bible when (you’re) missing the one main ingredient: Jesus’. Not so, of course; the Bible is there for anyone who wants to consider and ‘contest’ it. Granted one’s perspective will be coloured by how one regards it to begin with –

whether you approach it with a reasonable degree of objectivity or look at it through the myopia of faith;

whether you take what it says at face value or apply shifty exegesis to smooth out its many inconsistencies;

whether you acknowledge it was created over time by a succession of fallible men or assume it represents the accurately recorded words of God;

whether you regard it as beliefs of ancient tribesmen and religious fanatics or see it as the means of salvation and the ultimate guide to life.

It is only reasonable that those who take the first of each of these alternatives look to those who take the latter to see how closely they adhere to the demands the Bible makes of them. It’s reasonable because those who believe in its magical properties use it to tell the rest of us how wicked and/or lost we are and how much we need Jesus. If the Bible is the Word of God (as I’ve noted before, it doesn’t claim to be; it’s Christians who say it is), instructing believers on how to live their lives while spreading the gospel, it is not unreasonable for those of us on the receiving end of their ‘witness’ to take a look at how that works out. Not so well as it happens.

Now either this is the fault of the book – heaven forfend that it isn’t clear about what’s expected of God’s Chosen – or Christians themselves are to blame for failing to live as it expects. Unsurprisingly, it’s a combination of the two; a book of mixed messages in the hands of flawed human beings. When Christians refuse to acknowledge that the Bible is far from perfect they are faced with the challenge of making its impossible demands compatible with their own imperfections. They have a number of cop-out excuses that enable them to do this, several of which appear in the comments on this blog. I’ve discussed a number of them before, but here’s a quick summary:

Christians are not perfect and the Bible doesn’t say we should be (actually it does, in Matthew 5.48);

Others have no right to be critical of Christians when we’re doing our best;

You can’t use our own book against us when you don’t know Jesus (see above);

You’re a sinner so what do you know?;

You’re quoting out of context (and only Christians can do that);

You’re not applying the correct exegesis and/or hermeneutics (i.e. mine);

It is unfair to lump all Christians together.

Is it? Is it really unfair to lump all Christians together? Aren’t you all meant to be one body, the Body of Christ – you, the Pope, Westboro Baptists, the mega-churches and their celebrity pastors, Joyce Meyer, those who would stone gays, those who affirm gays, Franklin Graham, Alpha converts, abortion-clinic bombers, African witch-finders, Archbishop Sentamu, ‘Emergents’, those who belong to one of the thousands of other denominations and all your friends in your own little church? Who are you to say who’s saved and who isn’t? All Christians represent all other Christians, who represent Christ himself. The Bible says so in 1 Corinthians 12.12-26, Ephesians 4.14 -16 and elsewhere. Or did it get it wrong again?