Christians are commanded to ‘take up their crosses’ to follow Jesus (Luke 9.23). That means, amongst other things, doing what he commands. Yet Christians don’t just fail to do as he tells them, they replace his agenda with their own and completely ignore him. Being a Christian, according to Jesus – and you’d think he’d know – is not about pointing out the failings of others, nor about defending God’s honour (as an omnipotent being he’s more than capable of doing that himself) and it isn’t about condemning those you don’t agree with. It’s about treating others as you’d like to be treated, loving your enemies… things like these, in fact –

Yet Christians judge relentlessly and tell us they’re justified in doing so: ‘you’re a sinner’, ‘you’re going to hell’, ‘gay people are of the devil’, ‘you’ve got the wrong set of beliefs’. We can only suppose they’ve don’t have a problem with the judgement they themselves will face as a result (because they don’t really believe there’ll be any such judgement.)

But I say to you, love your enemies and pray for those who persecute you (Matthew 5.44).

What Jesus really meant to say here, surely, was ‘criticise those you don’t like, claim they’re infringing your rights, sue them if need be’. Yes, that’s it.

Give to everyone who begs from you, and do not refuse anyone who wants to borrow from you (Matthew 5.42).

Really? Let’s give it a go. Beg a Christian to pay off your mortgage or ask to borrow the cash for new car. See how far that gets you. The problem here, as with all of these commands, is that Jesus really has no idea. No wonder Christians ignore this one.

Another ‘don’t judge’ command, to which Christians respond, ‘What log? Your speck is more of an eyesore than my log. My log doesn’t impede my vision at all. It’s you who can’t see.’

If anyone strikes you on the cheek, offer the other also; and from anyone who takes away your coat do not withhold even your shirt (Luke 6.28).

So how about it Christians? Maybe if you were doing what Jesus commands instead of judging the rest of us, we might take you a little more seriously. And, assuming he’s up in Heaven watching you – though even you know he isn’t or else you’d be doing as he tells you – so would Jesus himself. 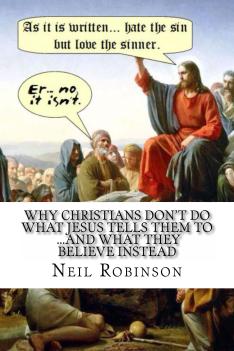 For more on this topic – Christians’ failure to take any notice of Jesus’ commands – see my book Why Christian Don’t Do What Jesus Tells Them To …And What They Believe Instead, available from Amazon.