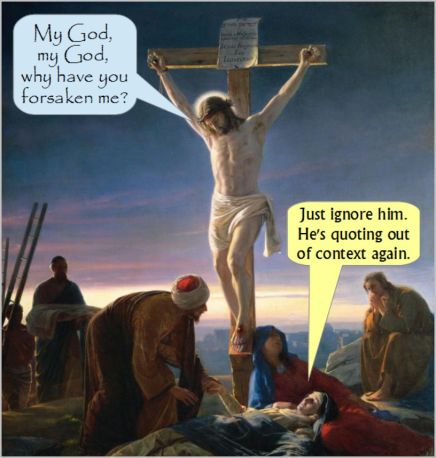 Pastor Chris Linzey didn’t like my previous post. He attacked its shoddy journalism(?), complained I exercised faulty hermeneutics and was upset I quoted bits of the Bible ‘out of context’. What he didn’t do, of course, was address the point made in the post, that Christians are selective about the parts of the New Testament they’ll accept, nor did he answer my question about how they decide which commands to follow and which not. Ironic, really, for someone whose blog has the strap line ‘Turning the Bible into Behavior’.

Christians are inherently dishonest about which parts of the supposed ‘Word of God’ – the New Testament specifically – they’ll acknowledge, believe and apply to their own lives. They mask this dishonesty, from themselves as much as anyone else, with a sleight of hand they mistake for hermeneutics (more on this in two post’s time) and by wilfully misinterpreting those who draw attention to their inconsistency. Pastor Chris didn’t seem to understand the fairly simple points I made in ‘Pick and Mix’ so came up with a couple of avoidance strategies. First, he took a swipe or two at my writing style (fair enough, though no-one was compelling him to read it) before, secondly, setting up strawman arguments to attack. They certainly weren’t my arguments he was tilting his lance at, that’s for sure. I guess this is what Christians mean by putting on the armour of God; you gotta deflect criticism by whatever means possible.

I’d like here to address though, Chris’s claim that I was quoting the Bible ‘out of context’. I have to say I find this one of the most unconvincing rejoinders – it hardly qualifies as an argument – that Christians offer in defence of their beliefs, right up there with ‘you wouldn’t dare say this about Islam’.

A quotation from any source, not just the Bible, is necessarily out of context no matter how much of it one uses. There is no way round this, even if one resorts to quoting extensive amounts of material, which I do when the meaning isn’t apparent from a short quotation, like here, for example. Nonetheless, a lengthy quotation is still decontextualised, from its letter or gospel as well as from the original time, place and culture in which it was written. In addition, while long quotations might be appropriate for longer academic papers (I have some experience of these and even there, great chunks are rarely necessary) they’re not always suitable for short, pithy blog posts.

In any case, the objection really only has validity if quoting ‘out of context’ somehow distorts the meaning. If it doesn’t, if the meaning is apparent from the lines referenced, then quoting more isn’t necessary. Readers who have any doubts can always check the source material for themselves – I always provide chapter and verse – to gain a sense of the wider context for themselves. Remarkably, the verses I cite invariably turn out to have the same meaning in their greater context as they do when quoted in isolation. The Christian objection to them being ‘out of context’ is usually nothing more than a smoke screen to avoid addressing the point being made.

What of Christians themselves? Do they ever take ‘scripture’ out of context? Oh my, yes, and they’ve been doing it from the very beginning. The gospel writers, particularly Matthew, wrenched snippets from the ‘Old Testament’ to make ‘fulfilled’ prophecy out of verses that weren’t prophecy to begin with, and, as we’ll see next time, Jesus too lifted lines from their original context to allow him to make theological points.

Nor are Christian bloggers and apologists today averse to doing the same. Then there are those devotional posters with a single, ‘comforting’ verse of scripture on them (like the one I used to have that said, ‘Heaven and earth will pass away but my words will never pass away’); the placards that surround street preachers with ‘For God so loved the world he gave his only begotten Son’ and ‘Ye must be born again’; the banners at marches and parades that declare ‘Repent or Perish’ or ‘Christ died for the Ungodly’. Each and every one out of context. I suppose if the original sense is more or less preserved then these might be seen as legitimate (if not entirely useless) but evidently taking scripture ‘out of context’ is something Christians are allowed do but others shouldn’t. Yet another case of do as I say, not as I do.

Next time, we’ll take a closer look at how believers ease their cognitive dissonance – between what the Bible says they should believe and do and what they actually believe and do – by disregarding context when it suits them.