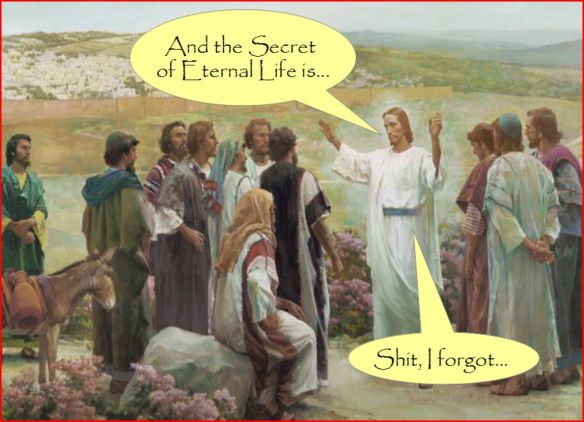 Some parts of the Bible are more important than others. A few verses have a prominence far greater than all the other parts of God’s Word™ and are far more authoritative. To obey these few verses alone guarantees one’s status as a true, born-again Christian.

I can announce that today I will be revealing which the verses are that matter more than all the rest.

There are only about three of them, one in the Old Testament, and two in the New. It’s possible there are a couple of others hidden away somewhere but they’re a little more obscure and don’t, as a result, give us the clarity we’ve come to expect from God’s Word™.

More ink has been spilt, or in recent times, more keyboards bashed, to pound out the implications of these verses than almost any others in the Good Book. Check out any Christian blog, any church web-site and the chances are you will find multiple postings and even entire sections dedicated to these three special verses. You could start looking here or here or here or here… There are sermons about them too and even protests and counter-protests, so important are they.

So, you might be wondering, are these the verses that tell us to love our neighbour as ourselves? Are they the ones that say we should turn the other cheek? To attend to the log in our own eye before pointing out the speck in someone else’s?

No, it’s none of these. In fact, The Most Important Words In The Bible are not ones uttered by Jesus who failed, inexplicably, to recognise their importance. Maybe they’re the words of St Paul then, about love being the most important thing or how to gain eternal life? No, it’s not those either. Only modern Christians have been able to recognise fully the significance of The Most Important Words.

And they are – fanfare from the Heavenly Host, please –

Leviticus 18.22 (duplicated in Leviticus 20.13):
You shall not lie with a male as with a woman; it is an abomination.

Romans 1.26-27
…God gave them up to degrading passions. Their women exchanged natural intercourse for unnatural, and in the same way also the men, giving up natural intercourse with women, were consumed with passion for one another. Men committed shameless acts with men and received in their own persons the due penalty for their error.

1 Corinthians 6.9-10 (plagiarised in 1 Timothy 1.9-10)
Fornicators, idolaters, adulterers, male prostitutes, sodomites, thieves, the greedy, drunkards, revilers, robbers – none of these will inherit the kingdom of God.

So now you know. The Most Important Words In The Bible are these, the verses condemning gay people. These are what Christians prioritise, write about and rant about more than any others. Not ‘forgive others if you want to be forgiven’, not ‘don’t judge’, not ‘give to all who ask’… but the ‘sin’ of homosexuality.

It’s irrelevant, apparently, that Jesus himself has nothing to say about same-sex relationships; irrelevant that, even in the verses where he touches on homosexuality, Paul lists a whole load of other ‘sins’ that Christians themselves are known to indulge in from time to time. No. The Bible is not, you see, about salvation, not about witnessing to non-believers – it’s about homosexuality and what a dreadful thing it is. Today’s Christians, having isolated these few verses, know this and so have their priorities straight.

Never mind that the Bible isn’t really God’s Word (see my previous two posts); never mind it has other things to say besides a few mentions of homosexuality; never mind that it demands a great deal of Christians themselves, which, naturally, they ignore – today’s believers know what Christianity is really about.