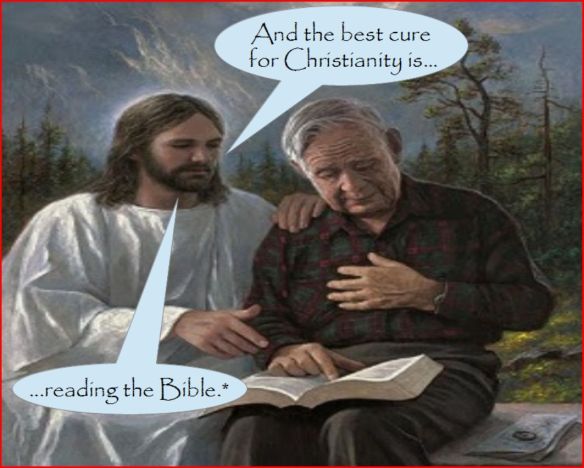 Since writing my posts about the Bible, I’ve stumbled across a few assertions out in Blogland that the Bible is the ‘ultimate authority’ on some subject or other. ‘The ultimate authority on the issue of homosexuality is the Bible’ says Tim Brown, while Marsha West claims ‘the Bible’s the final authority in all matters of faith’ and the snappily titled ‘Ethics & Religious Liberty Commission of the Southern Baptist Convention’ insists that ‘as Christians we must affirm our commitment to divine revelation, the written Word of God— the Bible—as our ultimate authority base.’

You might wonder how a book, written largely by bronze and iron-age tribesmen and first-century zealots who thought their world was going to end any day soon, could produce anything authoritative. Especially when these men (and they were all men) get it wrong about –

How the world was created. Genesis 1 tells us how Yahweh formed the Earth pretty much as it is today. In this made up explanation, light, night & day and plant life all precede the creation of the sun, and the order in which animal life appears is completely wrong.

How humans came into being… as fully formed adults. No messy evolution here. Moreover, woman is created from man, even though all foetuses are female to begin with and male comes always from female.

How the world got to be the mess it’s in. Sin, apparently; this first couple fucked the whole thing up. There was no death before they ate some fruit. After, there was.Move along. No understanding of evolution here.

How old the Earth is. The Bible’s genealogies imply the Earth is now 6000 years old or thereabouts. Actually it’s about 4.5 billion, but that doesn’t stop Ken Ham and other wingnuts insisting it can’t be, because, you know, the Bible.

How important the Israelites were. They weren’t; they were a relatively obscure and insignificant tribe. Their only ‘achievement’ seems to have been creating the idea of there being only one God, and even that took time to develop. Little of what the Torah/Old Testament claims for them has been supported by archaeological and other evidence, and much has been soundly refuted.

How the Israelites were slaves in Egypt. There is no evidence at all that they were. Moses and the whole of the ‘let my people go’ story appear to be complete fabrication.

How God’s Kingdom was going to come to the Earth in the first century. You’ve probably spotted that it didn’t. Yet the belief that it would drove both Jesus and Paul, and accounts for the very existence of Christianity (see previous posts). How wrong can you get?

How believers would never ‘perish’ (John 3.16). From the very first convert to the Christians who will die today, every believer has ‘perished’. There is no evidence whatsoever that any of them has been resurrected or that they enjoy eternal life. Like the end of the rainbow, this promise is perpetually out of reach, always somewhere in the future – even though Jesus and Paul were telling their followers 2000 years ago that it was all going to happen real soon.

How Jesus was coming back any minute. See above. Always going to happen just about now. Never does.

And so it goes.

That’s some ‘authority’, I’m sure you’ll agree. The Bible is wrong about practically everything, except when a preacher needs it to support his bigotry and/or prejudices. Then, miraculously, it’s the ultimate authority.