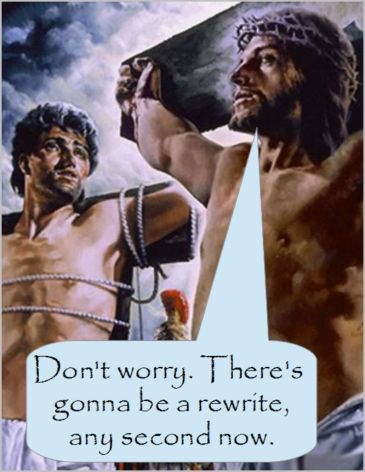 I want to say at the outset that I don’t think it matters whether Jesus existed or not. Even if he lived, it is highly unlikely he said much that is attributed to him or that he performed the miracles ascribed to him. Neither would it be the case that he rose from the dead or became a supernatural godman afterwards. All of these supposed attributes would be, for an individual who actually existed, later accretions. The man underneath them, the so-called historical Jesus, is difficult to detect. It hardly matters to Christians; they’re really only interested in the accretions, the later add-ons, the myth the man became.

Those who think Jesus never existed raise a number of interesting points, chief of which is that what I’ve referred to as accretions, being central to subsequent Christian belief, actually came first. The accounts of Jesus’ life – the gospels – they see as later attempts to provide the myth with a ‘realistic’ back story based in history. Certainly the gospels came after Paul had had his vision and had set about interpreting it to arrive at his convoluted theology about ‘the Christ’. Jesus-belief certainly existed decades before the first gospel account, Mark’s, and was as a result entirely independent from it. In this scenario, therefore, the myth came first and the stories of Jesus were crafted afterwards as supplementary fiction.

For me, however, as problematic as the gospels are, the synoptic accounts – Matthew, Mark and Luke – are largely at odds with Paul’s theology. If they were written to bolster the myth of a supernatural godman, they don’t do it very well. John’s gospel, on the other hand, is much more successful in portraying a mythical being, which is why its implausible ‘Word became flesh’ is not very much like the Jesus of the synoptic gospels.

The synoptics of course have their own agendas and do not represent accurate biographies of Jesus either – there are too many contradictions and anomalies to claim they do – but, to varying degrees, they do not present a Jesus who is the embodiment of Pauline theology. The synoptic Jesus doesn’t, for example, promote a salvation plan involving his own death or say that faith is the means by which one enters the Kingdom of God. These are ideas of Paul’s, as are notions of grace, election, sanctification, redemption, substitutionary atonement, imputation, gifts and fruits of the Spirit and even more mumbo-jumbo besides.

The good news of the synoptics’ Jesus, however, is that God’s Kingdom is coming to Earth soon and to be part of it one must become ‘righteous’ both by serving others and relating to them in a ‘measure for measure’ way: forgiving in order to be forgiven, being compassionate to be shown compassion, giving in order to receive, not judging so as to avoid being judged. This Jesus and his gospel are, moreover, predominantly Jewish; Matthew’s version in particular is virulently anti-Gentile. All of this is totally at odds with the magic formula of salvation-available-to-all of Paul’s make-believe. If this came first, it is difficult to see why the synoptic gospels would not present, as John does, a Jesus who is more compatible with it.

Either the synoptic gospel writers got much wrong in providing the Christ’s supposed back story or they were representing other traditions, ones that were different from and possibly even older than Paul’s interpretation. Belief in Jesus as teacher, prophet and, possibly, Messiah predates Paul (he refers to it himself while Matthew and Luke make use of an earlier sayings gospel known as ‘Q’) and it seems likely that Mark and Matthew in particular reflect these traditions, untainted by Paul’s fantasies. Of course these traditions too could have been invented, just as Paul’s theology is, but if that is the case, then, once again, the gospel writers – Mark and Matthew especially – make a decidedly bad job of it.

Next: what this ‘bad job’ tells us about the existence of Jesus.