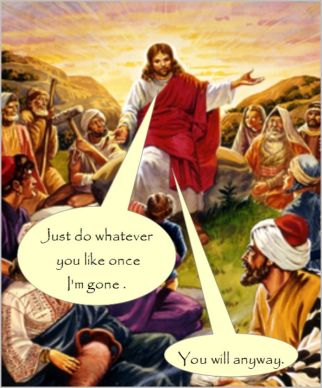 If religions took ‘do no harm’ to heart (as the Hippocratic Oath does) and their adherents were made to comply with it, what a better place this world would be. There’d be –

No more murder in the name of the Lord (whichever);

No more children molested by priests and pastors;

No churches attempting to cover up their crimes;

No more child deaths as a result of ‘faith-healing’;

No religiously-sanctioned denigration and abuse of women;

No more ritualistic mutilation of children’s and young women’s genitals;

No more religious scams and shams;

No more religiously-inspired vitriol directed at gay and transgender people;

No more barbaric executions of ‘minorities’, like gay men, women and those of other faiths.

Of course, even without these, the world would still not be perfect. Awful things would still happen. But the principle of doing no harm would eliminate much of the trauma inflicted on people by the proponents of irrational superstition.

On paper at least, the Abrahamic religions have expectations that are more demanding than simply doing no harm:

Love your neighbour as yourself (Leviticus 19:18; Judaism);

Love your enemies; treat others as you would like to be treated’ (Matthew 7.12 and 5.44; Christianity);

…compete with each other in doing good (Surat al-Ma’ida, 48; Islam).

However, these are just too damned hard for so many religionists. They disregard them and opt instead for the spiteful paranoia of the same holy books. Perhaps the simpler injunction of ‘do no harm’ would be easier for them. But until the preachers of judgement and hatred find it in themselves to promote such a principle, we will all continue to suffer the destructive effects of the ‘great’ faiths.

So, how long until the next terrorist attack? The next church child-abuse cover-up? The next rape scandal? The next persecution of gay people?

Not long at all.