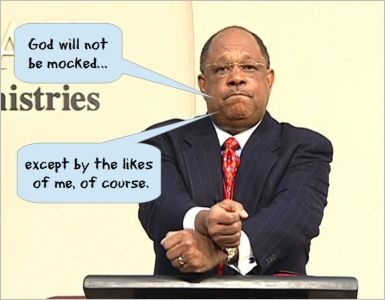 A special guest post by the Rev. Dexter B. Wright, pastor of the Church of Holy Eternal Righteousness.

Let me tell you something, good Christian people: it’s unnatural! They say there’s 10% of them in the population but that’s just part of the propaganda and their sordid agenda. It’s a big fat lie. Even if there were that many, why should they have the same rights as the rest of us normal folk? They’d have you believe it happens in nature too but I’ve yet to see it. They flaunt their perversion, brazenly practising their sin in public instead of keeping it behind closed doors where it belongs, if it belongs anywhere. They seek to redefine what is Right, just as the scriptures said would happen in these last days.

Christian brothers and sisters, we must stand up and oppose this unnatural lifestyle. It needs stamping out, punished like it used to be. In the past, when people had more respect for God, these kind of people would be punished and humiliated – beaten even. Sometimes they’d have their hand strapped up to stop them using it for perversion. That cured ’em. Least ways I think it did – made ’em start to be behave right and proper like the rest of us. These days we’re too liberal; we make excuses for them, like ‘they can’t help it’ and ‘they were born that way’. Let me tell you – no-one is born that way! It’s a choice, pure and simple, because God doesn’t make mistakes. And you can be sure he won’t sit idly by while these perverts literally shake their fists at him. A society that accepts – openly accepts – the flagrant practice of sin can expect to suffer the full force of God’s wrath. I tell you, brothers and sisters, the tribulation is upon us.

You mark my words: we tolerate this, it will mark the start of persecution like the church has never known. Are you ready for that? Good Christian folks are already being forced to serve these deviants with wedding cakes and the like – it’s either that or lose their business – and next they’ll be forced to embrace people who want to write with their feet or something. Make no mistake, that’s the ultimate aim here. And you know who’s behind this sinister agenda, don’t you? That’s right, Satan himself, the Father of Lies.

God couldn’t be clearer in his Holy Word; if it ain’t Right, then it’s wrong. Our wondrous savior favors one hand and one hand only – and it sure ain’t the left. Soon as we stamp out this abomination the better.

People have indeed suffered in the past for ‘choosing’ to be left-handed; ‘cures’ abounded.

The Bible frequently speaks of the right hand as the hand of note. See, for example, Matthew 25.31-34.

Picture: The ‘Honorable’ James Manning, chief pastor of the rabidly anti-gay Atlah church in Harlem, demonstrates how to make effective use of the right hand.