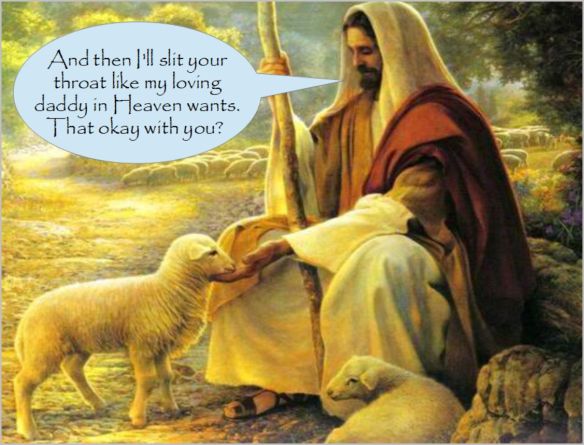 Well, isn’t that a comfort. Jesus, who said ‘blessed are the peacemakers’ and for whom Christians like to claim the title ‘Prince of Peace’, declares himself to be anything but.

Of course, it’s possible these words were put into Jesus’ mouth once belief in him had indeed started splitting families and communities; between those who subscribed to his cult and those who saw it for what it was. Maybe though he really did advocate armed rebellion – against the Roman and Jewish authorities – rather more than later believers care to admit. Even as they’ve come down to us, the gospels retain references to taking up arms in the cause of God’s Kingdom. For example:

Matthew 11.12: From the days of John the Baptist until now the kingdom of heaven has been coming violently and the violent take it by force.

Matthew 3.10: Even now the axe is lying at the root of the trees; every tree therefore that does not bear good fruit is cut down and thrown into the fire.

Luke 22. 36-38: He said to them… ‘the one who has no sword must sell his cloak and buy one. For I tell you, this scripture must be fulfilled in me, “And he was counted among the lawless”; and indeed what is written about me is being fulfilled.’ They said, ‘Lord, look, here are two swords.’ He replied, ‘It is enough.’

Luke 22.48-49: Jesus said to him, ‘Judas, is it with a kiss that you are betraying the Son of Man?’ When those who were around him saw what was coming, they asked, ‘Lord, should we strike with the sword?’ Then one of them struck the slave of the high priest and cut off his right ear. (Jesus promptly heals the slave and then says, sanctimoniously, that ‘those who live by the sword will die by it’, as if swords weren’t his idea in the first place!)

Luke 19.27: “But as for these enemies of mine who did not want me to be king over them—bring them here and slaughter them in my presence.”

Mark 15.26-27: The inscription of the charge against him read, ‘The King of the Jews.’ And with him they crucified two rebels, one on his right and one on his left.

So much for ‘love your enemies’ and ‘turn the other cheek’. So much for the Jesus who does nothing but preach love and forgiveness. So much too for Paul’s mystical Christ. There is a very dark side to Jesus that expresses itself in vengefulness and megalomania. That anyone so disturbed could be considered an emissary from God, let alone God the Son, beggars belief.

* Since writing this post I’ve read Marcus J. Borg’s Jesus: Uncovering the Life, Teachings, and Relevance of a Religious Revolutionary. Borg makes precisely the same point about the charges against Jesus (though he sees him as a non-violent revolutionary). He explains that the Greek word used to describe the two killed with him – rendered as ‘rebels’ above – ‘is the term more commonly used for those engaged in armed resistance against Rome – “terrorists” or “freedom fighters”, depending on one’s point of view (p265).