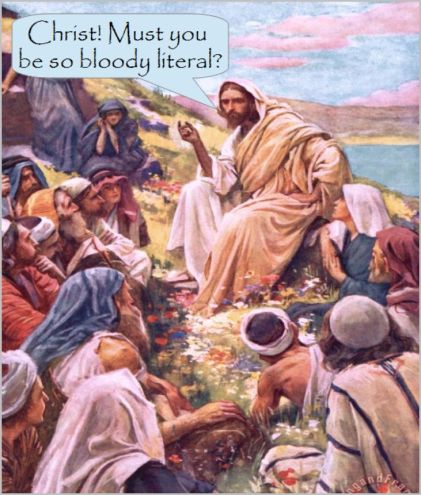 So we all sat down on the grass and waited for the great man to speak.

“You’re a winner,” he said eventually, “if you’re ordinary and oppressed, because one day you’re going to rule the Earth!” Everyone gasped. We were all of us just ordinary, plain-speaking folk and things like this didn’t happen to us.

“Yes, really,” he said, “because God is going to establish his kingdom on Earth. And when he does he’ll sweep away the rich and the powerful, and you’ll be in charge. This I promise.”

We couldn’t believe it – proper gobsmacked we were.

“You’re in luck too,” the teacher went on, “if you’re poor, because once God’s kingdom comes, you’ll be rich beyond measure. And as for those of you who are hungry, you’re going to be filled like you’ve never been filled before. God, you see, is going to turn everything upside. Those of you at the bottom of the heap now – and let’s face it, that’s all of you sorry schmucks – are suddenly going to find yourselves at the top. And those who are on top now will be right down at the bottom. This, I promise you, is how it’s going to be.”

I can tell you everyone was beaming. We could already feel the change in the air.
Then Eli, sitting next to me sticks up his hand. “Hey, boss,” he shouts.

“Eli,” I says to him, “don’t be disrespectful. “This bloke obviously knows what he’s talking about. He’s a messenger from God.”

“When’s all this going to happen, then?” asks Eli. “When can we expect this big change?”

“Oh,” the teacher says, “I was thinking… maybe in a couple of thousand years?”

“What?” Eli says. “What good is that to us? From the way you were talking we thought all these wunnerful things were going to happen soon. What’s the point of telling all of us, sitting here in front of you, that we’re gonna be top dog and everything if it’s not us you’re talking about.”

“Good point,” the great man says. “All right then. How about if it’s sooner?”

There’s a lot of murmuring and everybody thinks this a good idea.

“Great,” he says. “Then that’s settled. We’ll make it sooner, so that you guys are still around. How does that sound?”

Everybody says it sounds marvellous.

That was good enough for us and so we all set off home to get ready for the big changes we’d been promised.

“Thousands of years in the future,” Eli scoffs. “What a bloody con. Who does he think he is? God Almighty?”