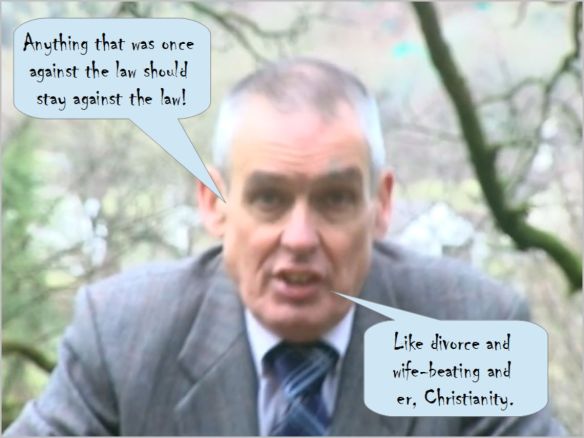 The ever-green, ever gay ‘National Director’ of Christian Voice Stephen ‘Act-the-man’ Green is at it again. In a video on YouTube that drips with the most un-Christ like sarcasm and vitriol, the Blessed Stephen takes on Stephen Fry and Benedict Cumberbatch’s petition to have gay men with historic convictions for ‘gross indecency’ pardoned (that’s consenting adult sex at a time when homosexuality was illegal.) Here’s the gist of Green’s ‘argument’:

There can be no doubt that ours is the most intelligent, compassionate, sophisticated and clever generation that has ever walked this earth. Clearly, if something is not against the law now, it never should have been.

Of course he intends this ironically, but for once he has stumbled on a truth of sorts. This is the cleverest generation that ever lived. We know more today than we ever did; it is estimated, for example, that the average person alive today knows far more than the cleverest Greek who lived in, say, Jesus’ time. That ancient Greek, in turn, knew far more than an illiterate Galilean preacher. So yes, we are cleverer – though not more intelligent – than people of the past; we have the benefit of two thousand years of learning behind us. Of course, our cleverness is marred by our continual reversion to tribalism, territorialism, greed and concomitant stupidity. This is the result of our being evolved primates – another fact Green disputes in his video with an attack on both Darwin and Dawkins – but nonetheless it remains the case that we humans have never known as much as we do today.

As for Green’s second sarcastic point, ‘if something is not against the law now, it never should have been’, well, that’s not what anyone is saying. Neither Fry nor Cumberbatch nor anyone else is trying to re-write history. What they are saying is that the injustice of the situation in the past should be acknowledged and rectified. Laws change as morals evolve. Green, however, thinks we should reclaim the values of a (non-existent) golden age when gay men were persecuted and prosecuted. According to this reasoning we should also reclaim other barbaric ‘standards’ of long ago; Green’s ‘logic’ dictates it. In fact, he advocates that we should be obedient to Biblical law, which would involve a return to things that are now illegal in all civilised societies; keeping slaves, beating others, rape, regarding women as property, suppressing women and executing non-conformists. These weren’t against the law once and weren’t even regarded as wrong, even though, when judged by any objective standard, they most emphatically were. Significantly, all were actively endorsed by Green’s God in his Magic Book*. We know they are inherently wrong, however, not just because we are clever and compassionate, but because we are repulsed by them when we see them practised by ISIS and other extremists today.

Christianity was once itself illegal, as was reading the Bible in English instead of Latin. This meant that in the past, Christians were sometimes executed simply for being Christians, heretics burnt at the stake. Green’s ironic principle can be applied here too: ‘if something is not against the law now, it never should have been’. With the benefit of hindsight and, yes, a bit of cleverness, we can see that being a Christian and reading the Bible in English should never have been crimes. Equally, those men convicted of victimless offences in the past shouldn’t have been. It is, however, and as I’ve already suggested, impossible to change the past. But we can try to rectify some of its mistakes.

However, the Rev. Green would prefer it that anything that was once illegal remains so. Christianity included, Stephen?