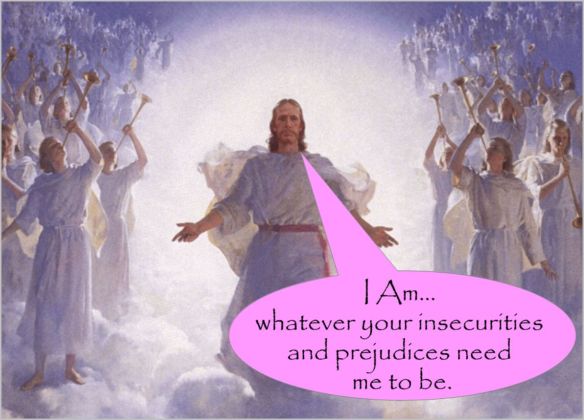 Let’s be clear from the outset here; Jesus never actually made any of the seven ‘I am’ claims put into his mouth in John’s gospel. You know the ones: ‘I am the Way, the Truth and the Life’, ‘I am the True Vine’, ‘the Good Shepherd’, ‘the Light of the World’ and so on. So it is a little unfair to lump them with all the idiotic things it’s more likely Jesus did say (see previous posts.)

How do we know he didn’t say them? Lots of reasons. Firstly, they’re not in the other three gospels all of which were written earlier than John’s, and are therefore closer to the time Jesus lived (though the earliest, Mark’s gospel, was probably put together thirty to forty years after Jesus lived.) If Jesus had really made all those grand ‘I am’ claims, wouldn’t the other gospel writers have recorded them too? Yet none of them mentions even one.

Secondly, in the synoptic gospels – Matthew, Mark and Luke – Jesus has a different message from the one given to him in John’s gospel. The earlier gospels have Jesus talk about himself only very rarely. Instead, he goes on at length about the coming of the Kingdom of God (or Heaven) and how y’all better get ready for it ’cause it’s a-coming soon. Was he wrong about that one! On the odd occasion he does refer to himself in the synoptic gospels, he often does it in a sort of coded way, calling himself ‘the son of man’. He hardly ever uses ‘I’, let alone makes grandiose claims about himself.

Thirdly, all three of the synoptic gospels rely on earlier sources, now lost to us, and none of those has Jesus make ‘I am’ statements either. How do we know? Because, again, they’re not there in any of the three accounts – Matthew, Mark or Luke – that are built up from them. Significantly, one of these sources is an early record of Jesus’ sayings; that’s a ‘sayings gospel’ that doesn’t relate any ‘I am’ sayings.

Fourthly, John’s gospel is late – at least sixty years after JC’s death and also after Paul’s supernatural Christianity had gained a foothold among the gullible. The Jesus of John’s gospel is a reworked version, more in-line with the ‘Christ’ that Paul preached and much less like the Jewish peasant who had lived and preached the Kingdom of God. Despite what Christians claim, John’s gospel is not another eye-witness report (none of the gospels is) that differs only in minor details from the other three accounts. It is total reworking of the story, with its central figure transformed into a sort of divine Superman, and the idea of the coming Kingdom relegated to a single mention. This change of agenda renders the fourth gospel utterly unreliable as an historical record of anything the earthly Jesus might have said.

Fifthly, Christians claim John’s gospel differs from the others because in it Jesus reveals special, secret truths about himself to ‘the disciple whom he loved’, traditionally the John whom the gospel is named after. But again, the problem with this explanation is that the synoptic gospels don’t mention Jesus favouring one particular disciple over the others (unless it’s Simon Peter). In these, John, a loud, brash fisherman, plays only a minor role. Why don’t the synoptics refer to the special, more intimate relationship that John’s gospel refers to? Largely because there wasn’t one – not until the fourth gospel came to be written and ‘John’, who led the community that produced it, wanted to bump up his part.

So, idiotic as it would have been for an itinerant Jewish preacher and ‘prophet’, whose mission ended in failure, to make these claims about himself, Jesus never did. He didn’t say he was ‘the Way, the Truth and the Life’. Or ‘the Vine’. Or ‘the Good Shepherd’. These are claims made for him long after he lived, by people who were persuaded by a snake-oil salesman that a God-man had mystically ‘saved’ them. They ‘re-imagined’ Jesus, sayings and all, to fit their idea of what he must have been like – and John’s gospel was born.

Its Jesus, if he was being honest, should really have said, ‘I Am… nothing but Pure Invention.’

4 thoughts on “Idiotic Stuff Jesus Said 6: The ‘I Am’ sayings”