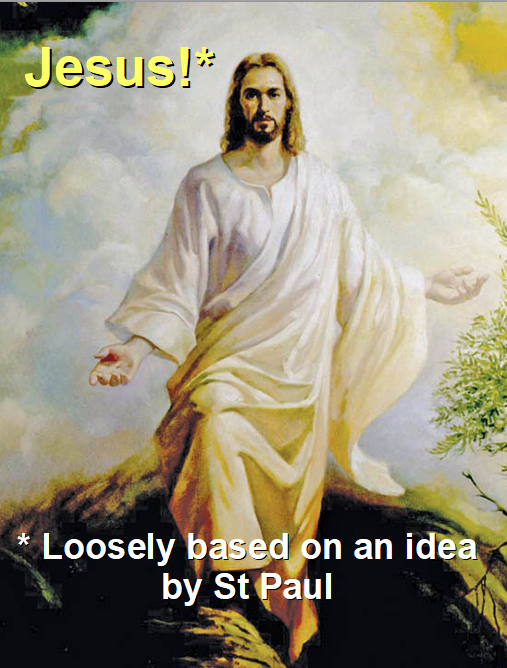 The time scales are important. Christians today argue that Jesus can’t possibly have been an imagined being because fifty to sixty years represents an insufficient period for him to have transitioned into a fully realised historical figure. Yet this is precisely what we see between Paul and others’ visions of Christ and the writing of Mark and Matthew’s gospels. (Richard Carrier makes the case that the writer of the former was cognizant of the fact he was not writing history but allegory. If so, Matthew’s gospel, circa 80CE, is the first to depict Jesus as an actual person.)

As related by Paul, his vision of the heavenly Christ followed those of Cephas, the twelve and 500 others. His experience is usually dated to between 34 and 37CE. These visions appear not to be rooted in reality. Paul writes at length about his Lord Jesus Christ yet shows no knowledge about the life, relationships, teaching or miracles of the character who later appears in the gospels. His Christ exists only in a celestial heaven where Paul believes his sacrifice also took place there.

Christians argue instead that Christ was a real person. He lived, preached and died in a specific geographical area (though the gospel writers don’t all agree where this was) at a particular time (they don’t agree on this either). After his resurrection he ascended to a heaven believed to be above the sky. He became a spiritual entity at this point, having lived a real life on Earth. Later Christians would argue he resumed the role of celestial being. After his ascension he began communicating with mortals attuned to him using visions and dreams; hence Paul’s and others’ revelatory experiences.

But wait. If fifty years is too short a period for a celestial Christ to be seen as a real person, then 4 years or less – the time between Jesus’ supposed ascension and Paul experiencing him in his head – is even shorter. If we’re judging how probable either transition is in terms of the time it took, the Christian preference of 3-4 years is by far the less likely.

A transition is involved either way: from a wholly spiritual entity to human, or from human to a celestial being. The first, taking about 50 years, is too short a time for Christians. They prefer the second, which involves only 4 years. It also entails supernatural intervention, with God required to engineer the transition from the human to the quasi-divine.

Taking Occam’s razor to the evidence – Paul’s genuine letters, the other early letters and the book of Hebrews – it is clear the transition happened the other way round. Christ was originally an imagined spiritual being, envisaged by Paul and others. The spiritual Christ was subsequently, 50 years later, given an earthly back story, like one of those shaky prequels created for an already successful TV series. This story in its different versions eventually came to dominate, stories being easier to remember and believe than complex theories about invisible beings.