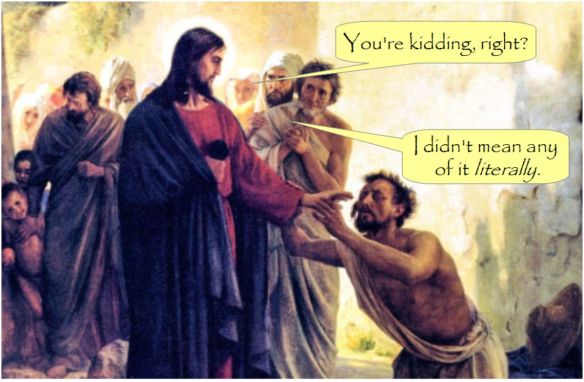 Over at the distastefully named Cripplegate, Jordan Standridge has been considering what Christians should do when a homeless person asks for money. Jordan wants some means of weeding out the fakes (fair enough, though he doesn’t really have any clear strategy for doing this) and also attaches conditions to his giving – the recipient of his largesse has to listen to him ‘sharing the gospel’. Jordan reports that none of those he treats to a free meal object to him doing this – probably because they fear going hungry if they don’t listen to him droning on about Jesus.

Most of the comments following Jordan’s post betray the Christian eagerness not to have to follow the command of Jesus’ to give unstintingly. I felt moved to add one of my own:

It’s good that you’re considering ways you can help the poor and homeless, but Jesus says to ‘give to everyone who asks’ (Luke 6.30). ‘Everyone’ is a pretty inclusive! There’s no mention of ‘weeding out the fakes’; just give to all. Seems to me you’re hedging around this command.

This met with variety of responses, shown below in italics, followed by my replies:

Mike: By that logic, if a homeless person asks you for your home, are you then to sign it over to them? If they simply ask for your car, are you then going to hand them your keys? Of course not. That’s not what Luke 6 has in mind. Otherwise YOU would be left on the street naked and homeless simply because someone ASKED you for everything you owned…

You’re right, Mike – it’s completely absurd and unreasonable. But it’s Jesus’ absurdity and unreasonableness, not mine. If you want to say he’s wrong – as you do when you say ‘that’s not what Luke 6 has in mind’ (you know what it ‘has in mind’, I take it?) – then your dispute is with him, not me.

Jane: I believe your atheism qualifies you as the one having the dispute with Him.

Well, Jane, you’re the one who claims to obey him as Lord and Savior and yet here you are trying to figure out ways not to. It brings to mind another of his sayings from Luke 6: ‘Why do you call me “Lord, lord,” and not do what I tell you?’ Why indeed.

Craig: The passage in Luke 6 is not instructions for the body of Christ. In the gospels Jesus has come to Israel as their Messiah to bring in the kingdom that was promised to them. Jesus is telling them how it will be if they accept Him as Messiah.

What you’re really saying is ‘we Christians don’t much care for this commandment, so we’ve decided it doesn’t apply to us.’

However, if we were to go along with your argument, that Jesus is not addressing the ‘body of Christ’ here, then it follows neither can he be addressing it anywhere else in the gospels. You can’t simply delete the bits you don’t like.

4CommenceFiring4: “Give to everyone who asks” doesn’t specify what to give, or how much. The other commands–like going the second mile or giving them your cloak when they ask for your shirt–has to do with attitude, not mathematical formulas.

The Jews asked Jesus for a “sign” that He was the Christ. Did violate His own standards by not providing a sign? If you think He did, then it would be fruitless to get into the subject any further.

Really? It’s to do with attitude not action? Who says so? I thought the Bible was the literal word of God, meaning Jesus’ commands here should be taken at face value. Thanks for enlightening me; I’m relieved to learn there’s enough wriggle room not to have to do what Jesus says.

Oh, and according to John’s gospel, Jesus provided numerous ‘signs’ for ‘the Jews’ (which he was himself, of course.)

4CommenceFiring4: “The Bible is the literal Word of God” is the claim of someone–believer or otherwise–who hasn’t thought much about what that even means. There are theological debates by serious people about that, so don’t think for one minute that because “literal” means different things to different people means it doesn’t mean anything and we can go merrily on our way thinking we have nothing to which we owe our attention.

A devotion to strict literalism would lead to ridiculous conclusions, as you well know, so if you intend to use that as a defense for why the Bible isn’t to be taken seriously, try again. Smarter people than either of us have devoted their lives to debunking it, and it’s still standing long after they faded away. So don’t waste your time with that empty pursuit.

The bottom line is, are you ready for what comes next? And are you sure? It’s a bet you can’t afford to get wrong. Examine that, and everything else is secondary.

Great stuff. The ingenuity and effort that goes into avoiding doing what Jesus clearly commands is truly impressive.

Am I ready for what comes next? Sure. Oblivion never hurt anyone.

Meanwhile, the homeless go on being homeless and Christians continue to demonstrate that the people who get the most out of their ‘discipleship’ is primarily they themselves.