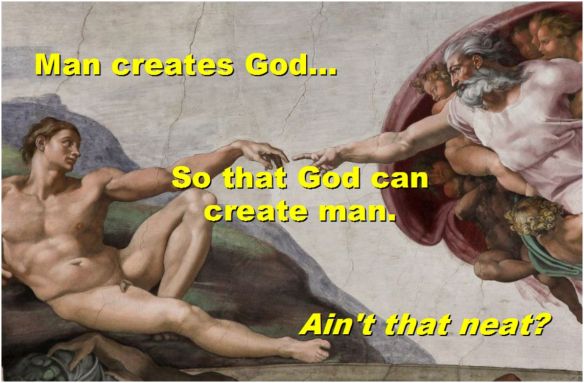 I’ve recently encountered again the ‘argument’ (it’s actually no more than an assertion) that without God logic and reason would not exist.

Here’s how ‘Liam’ puts it in a comment on Escaping Christian Fundamentalism:

If anything, the illogical nature of a godless universe is a massive pointer to a God, without Whom there is no reason or truth or logic…

To a degree this is right; if God made the universe and everything in it, including reason and truth and logic then, yes, they would owe their existence to him.

But it all hinges on that word ‘if’.

Equally, if God doesn’t exist, it follows he could not have created the universe and everything in it – including logic, rationality and truth.

One cannot take these things and say they are evidence that God exists and also that they only exist because God made them. Not unless you’re happy with a tautology – a feedback loop where each assumption is its own conclusion. Demonstrate, on the other hand, that God exists independently from the human imagination and then maybe you might be able to make the case that he created logic and reason. As it is, pointing to human attributes like logic and reason doesn’t ‘prove’ that God exists; it demonstrates only that these attributes are characteristics of the human mind. Logic, truth, reason (and mathematics), like God himself, have no independent existence outside of human cognition. They are ways of explaining life and the universe; they are not life and the universe themselves.

If, as seems probable, God doesn’t exist, then evidently, logic, truth and reason did not originate with him. Indeed, they took billions of years of slow evolution to develop. We know of no other way for intelligence to arise; and only intelligence produces logic, reason and truths. No God required

3 thoughts on “Why logic, reason and truth have nothing to do with any god”