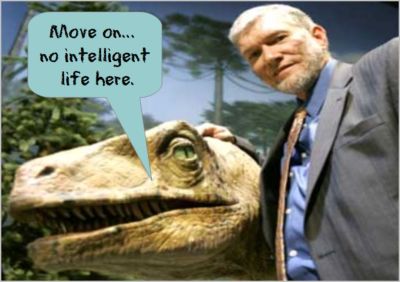 Anyone searching for extra-terrestrial life – NASA, SETI and so on – can stop now. We know definitively that there isn’t any out there. How do we know? Because Ken Ham says so. The Bible – Genesis specifically – doesn’t mention life on other planets so that means there isn’t:

(T)he notion of alien life does not square well with Scripture. The earth is unique. God designed the earth for life. The other planets have an entirely different purpose than does the earth, and thus, they are designed differently… where does the Bible discuss the creation of life on the “lights in the expanse of the heavens”? There is no such description because the lights in the expanse were not designed to accommodate life [this is utter gibberish; life within stars? Who has ever suggested that?] God gave care of the earth to man, but the heavens are the Lord’s. From a biblical perspective, extraterrestrial life does not seem reasonable.

But hang on a minute! The Bible doesn’t mention other planets, never mind whether there’s life on them. It doesn’t tell us anything about cultures outside of a small area in the Middle East, doesn’t mention the Americas or Australasia, doesn’t have anything to say about microbes, anti-biotics, computers or technology in general. It must follow, therefore – to use Ken’s logic – that none of these things exist either.

The reason the Bible doesn’t mention any of them, and a myriad of other things, is not because they don’t exist but because the primitive priests and ignorant scribes who wrote Genesis and the rest of Ken’s magic book didn’t know that they did. They had no concept that the Earth is a planet, let alone that there are others; they had no idea that the sun is a star, nor that other stars, which they thought were attached to the inner surface of a canopy surrounding the Earth, are suns. With such a limited cosmology, the possibility that there might be life on other planets was as alien to them as, well, aliens themselves.

Whether there is extra-terrestrial life, and whether any of it is intelligent, we may never know. But either way, Ham’s deity will have no bearing on it, nor it on the Christian God. The existence of aliens, like their absence, won’t breathe life into an already discredited idea.