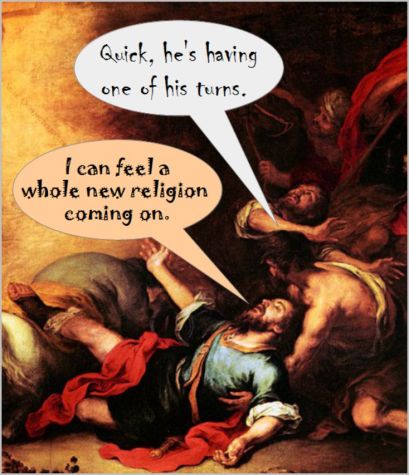 The missionaries pressed on into the Amazonian jungle. They were now in uncharted territory. No-one had ever been this far in. And then, sounds from somewhere not too distant; human sounds, human voices – singing even. The missionary troupe emerged into the clearing to an amazing sight. Groups of Amazonian natives gathered together, a rudimentary cross in front of them, towards which they were undeniably directing their worship. These people, whose existence had hitherto been unknown, and who had never before encountered Westerners, were Christians!

Weeks later once basic communication had been established, the tribe’s chief priest and the head missionary communed together. The priest explained how, long ago in the past, his ancestors had recognised God’s presence in the incredible world around them and had opened their hearts to him. As a result – Miracle of Miracles! – God sent them a vision of Christ himself, much as he had to St Paul and the other disciples, and the whole tribe came to believe in Jesus. Ever since then, the tribe had worshipped the one true God and his only son, that same Jesus Christ.

“Amazing,” said the missionary, “so it looks like St Paul was absolutely right when he said God reveals himself in nature and speaks to our hearts to make himself known to us. It’s not as if we ever needed the Bible, or to go round telling people how to be saved. God is more than capable of doing it for himself. Praise the Lord and pass the communion wine!”

What a story! And it happened time and time again as the world was opened up by explorers and missionaries.

Or maybe not. Definitely not, in fact. But it should have happened if what Paul says in Romans 1.18-21 is right, as Ken Ham believes it to be:

For the wrath of God is revealed from heaven against all ungodliness and wickedness of those who by their wickedness suppress the truth. For what can be known about God is plain to them, because God has shown it to them. Ever since the creation of the world his eternal power and divine nature, invisible though they are, have been understood and seen through the things he has made. So they are without excuse; for though they knew God, they did not honour him as God or give thanks to him, but they became futile in their thinking, and their senseless minds were darkened.

If God is so obvious in the world that (supposedly) he created and if we humans can see and understand him through it, then why do Christians need to proselytise? Why doesn’t God make his personal presence felt just that tiny bit more clearly – with the odd ‘revelation’ like the one he provided Paul, say – so that people come to believe in him more fully? And by ‘him’, of course, I mean the proper God – the Jesus one. Why does he leave it so that folk seemingly pick up on the special vibes he’s placed in their hearts but then worship a ‘counterfeit’ god, like Allah or Jah or, back in Paul’s day, Zeus? Why doesn’t he provide revelations like he used to, to ensure everyone knows just who it is who’s standing at the door knocking?

If he did that, if God did indeed plant clues to his presence both around us and in us as Paul says he does, then the Bible wouldn’t be needed to convert people. But that’s not what we find, which is that the Bible is essential in perpetuating the God-myth. We wouldn’t even be aware of Paul’s ridiculous claims if they were not preserved in that ramshackle collection of writings.

The indoctrination of others is utterly reliant on two things and two things only. Not God-in-nature or inner prompting or visions, but on ‘the scriptures’ and those who are driven to spread the Jesus-meme. Now does that not strike you as odd? It strikes me as something entirely human, with nothing supernatural about it. If people have to be told, evangelised to and indoctrinated into Christianity, then it can hardly be the case that they see the one true God in nature or have an intuitive feel for him. If that were the case, then we would have discovered hitherto unknown groups of humans who already knew of him and the nonsensical clutter of beliefs that surround him. And we haven’t. Ever.