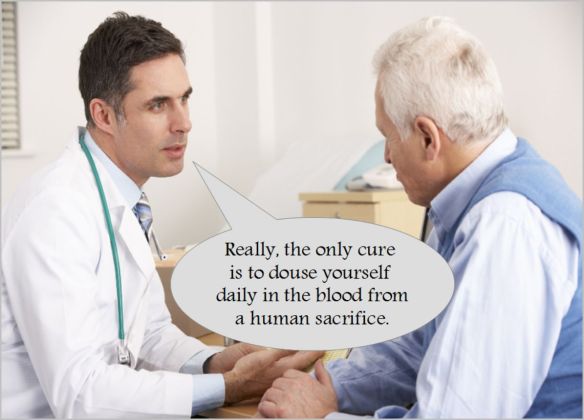 In 1665, the great plague overtook London and killed about a sixth of its population. The church and other authorities believed the plague was a punishment from God for the sins of those who lived in the city.

Such a view is understandable among people who lived in a pre-scientific era (just) and had no other way of explaining natural phenomena other than from a religious perspective. Their ignorance is perhaps forgiveable.

Speed forward to 2014 and the outbreak of the Ebola virus in Liberia and other parts of Africa. Ebola causes an incurable disease with a 90% fatality rate. And guess what? Those of arrested development, whose thinking is still stuck in the seventeenth century, attribute it to God. More than that, they predict a plague on a scale next to which the 1665 plague looks like little more than a minor skin irritation. And all because of the sins of other people (naturally). According to Liberian church leaders:

The usual suspects – atheists, secularists, those pesky homosexuals, pornography, abortionists and women who have abortions – are bringing the judgement of God to Africa, and far more importantly, according to American evangelical leaders, to America itself. There’s an even a lunatic fringe there who welcome it:

Everybody who stands up and embraces sodomy, BE THOU CURSED WITH EBOLA! Cursed be ye for embracing this!’

As ever God’s judgement, if that’s what we’re dealing with, will be indiscriminate. It will strike down the weak, the elderly, the vulnerable, and, yes, Christian missionaries (the two American medics who have contracted the disease are just that.) Because God’s like that; when he’s in his Hulk-smash mode, he doesn’t care who gets in his way.

There is a cure though. Just as the scientifically illiterate in 1665 thought prayer would spare them from the plague, the way to survive the coming Ebola pandemic is, according to Pastor Rick Wiles, to be covered in the blood of Jesus:

Now this Ebola epidemic could become a global pandemic and that’s another name for plague. It may be the great attitude adjustment that I believe is coming. Ebola could solve America’s problems with atheism, homosexuality, sexual promiscuity, pornography, and abortion…
If Ebola becomes a global plague, you better make sure the blood of Jesus is upon you. You better make sure you been marked by the angels so that you are protected by God. If not, you may be a candidate to meet the Grim Reaper.

Yes, only true believers who have the blood of a long dead Jewish preacher ‘upon’ them, and angels hovering over their heads, will survive the coming plague (so those Christian missionaries are safe after all – they needn’t bother with the medical care they’re currently receiving back in the States).

This isn’t even seventeenth century thinking; it’s straight from the bronze age.

Will there be a world-wide Ebola plague? It seems unlikely, but who knows; life is more precarious than we sometimes like to admit. If there is, it won’t be because a vengeful, pissed-off God is inflicting it on us… because there’s no such entity. Nor is there a nice, loving, daddy God either – but then he doesn’t figure in this particular scenario anyway.

In spite of what the Bible promises (James 5.14-15), there’s no supernatural protection from Ebola, nor from any other disease. The poor souls who died of the plague in seventeenth century England found that out the hard way. Praying to God and sloshing about in the blood of Jesus, metaphorically or otherwise, protects no-one.

3 thoughts on “Our touchy Loving Father is pissed off (again)”