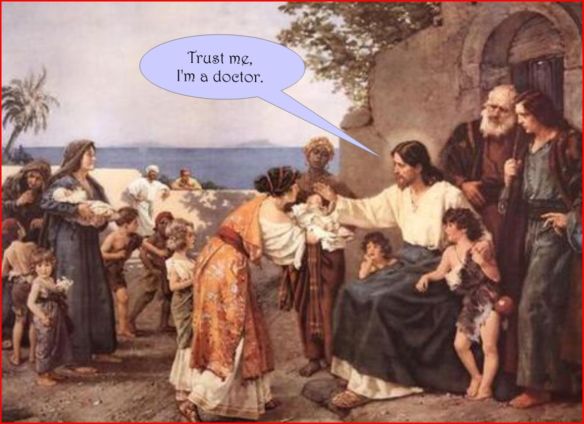 Was JC a great moral teacher?

No, the best things he said – do unto others, love your neighbour – had already been said eons before he came along. Some of the other stuff he came out with was ridiculously impractical – give away all you have; live only for today; turn the other cheek – that his followers have been unable to do from day one.

Did what he said about God turn out to be right?

No. He said God would establish his Kingdom on Earth while the disciples were still alive.

Did he commit himself to long-term responsibility for others and their needs?

Did he experience the infirmities and difficulties of old age?

Did he suffer from any of the serious illnesses we mere mortals are prone to?

Did he give over his entire life to raising children or taking care of elderly relatives?

Not that we know of.

Did he have to work each day to earn a living?

Did he have any understanding of science and of how the world works?

Erm, no. He thought people became ill because of sin and demon possession and that Heaven was in the sky.

Was he interested in anything but his own futile ‘mission’?

Apart from his last few days did he know suffering, the everyday frustrations of life or the daily struggle to make ends meet?

Did he, in short, know anything of the life as it was lived and is lived by ordinary people?

There was nothing marvellous about Jesus. He was out of touch with ordinary people and at loggerheads with those cleverer than he was. He was a failed prophet who was turned into a supernatural being by those who came along afterwards – mainly Paul, who’d never met him – and is worshipped today by those who ignore most of what he said.