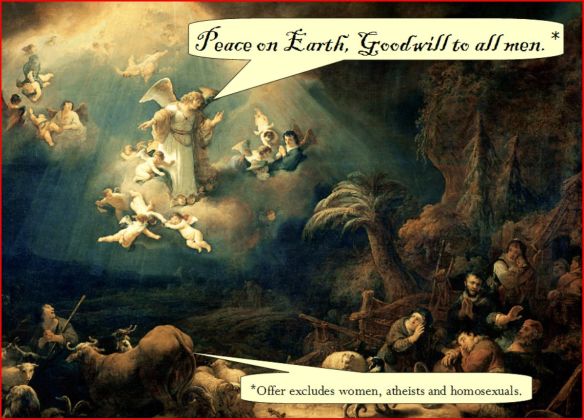 That most fallible of books, the Bible, often wants it both ways. Never more so than when it’s trying to add spin to its central character. It wants us to believe that Jesus was born of a virgin, with no human male involved, and, at the same time, that he was physically descended from King David on his dad’s side.

He’s got to be born of David’s line, you see, because the prophecies say the Messiah will be just that. The writer of Acts (‘Luke’) knows this and tells his readers that God promised King David that through ‘the fruit of his loins, according to the flesh, he would raise up Christ to sit on his throne’. (Acts 2.30, KJV; my emphasis). The reference is to 2 Samuel 7:12, where Yahweh does indeed appear to tell David that he ‘will raise up your offspring after you, who shall come forth from your body, and I will establish his Kingdom’. This is to be a physical descendancy and is the reason for all those ‘begats’ at the start of some of the gospels; they are there to establish Jesus’ (supposed) royal descent on his father’s side. This is why, in his gospel, Luke contrives to get Mary and Joseph to Bethlehem for the birth: ‘Joseph also went from the town of Nazareth in Galilee to Judea, to the city of David called Bethlehem, because he was descended from the house and family of David‘ (Luke 2.4). That’s Joseph who was descended from David. Not Mary, not Jesus’ uncle Charlie and not the Almighty himself. Joseph.

Perversely, it is also Luke who insists that Jesus is the product of divine impregnation and a virgin birth (Luke 1.32-35). Why doesn’t he realise that if Jesus was virginally conceived, he cannot be the fruit of any human male’s loins? Luke includes the virgin conception and birth in his nativity story while insisting, in both his gospel and in Acts, that Jesus is the Messiah precisely because he is a physical descendant of David (see, for example, Luke 1.27, 1.32, 1.69, 2.4, 2.11, 3.31, 18.38, 20.41). But Jesus can’t be both a physical descendent of David through Joseph and the result of the God helping himself to a nice young girl. Could it be the two conflicting accounts were written by different fantasists?

So, is Jesus the ‘Son of God’ because he was created by the Almighty’s impregnation of Mary or is he the Messiah because he’s King David’s descendant ‘according to the flesh’? Either Jesus is physically descended from David or he is a being conceived through divine rape, like other mythical god-men of the ancient world.

He cannot be both – though he could, of course, be neither.