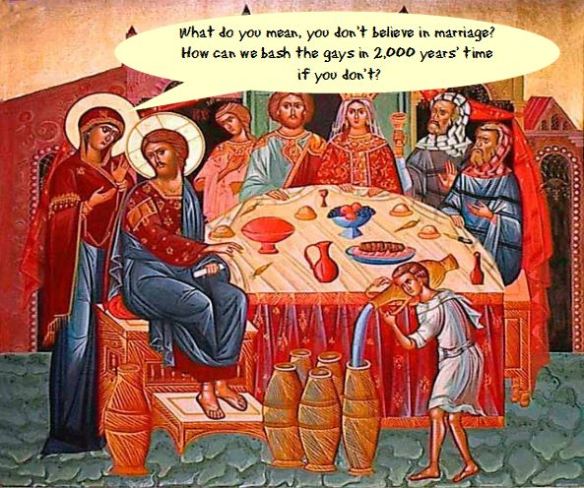 What does Jesus really have to say about marriage? It’s not what you think.

It is almost impossible to visit a Christian website these days and not find it making pronouncements about gay marriage, same-sex relationships and the ‘evil’ of homosexuality. Some, like Christian Voice, seem to think that the gospel is about nothing else. Elsewhere, Bishop John Quinn of Minnesota, a celibate, single male and thus an expert in matters matrimonial, writes that ‘from the beginning, the church has taught that marriage is a lifetime relationship between one man and one woman… It is a sacrament, instituted by Jesus Christ to provide the special graces that are needed to live according to God’s law and to give birth to the next generation”. Alas, the bishop doesn’t know his Bible, nor his Lord’s teaching. He is not alone in superimposing his own views of marriage on the Bible; it is a common practice among Christians today.

Should you be inclined to do so, you will once again search in vain either for Jesus ‘instituting’ modern marriage or for the early church promoting it. Those who claim he does usually cite Jesus’ apparent endorsement of Genesis 2.24 from Matthew 19.5-6:

“a man shall leave his father and mother and be joined to his wife, and the two shall become one flesh”. So they are no longer two, but one flesh. Therefore what God has joined together, let no one separate.

In context, though, Jesus is actually discussing divorce, not marriage, and is making the point that Jewish law permits divorce only because men and women are weak. This prompts the disciples to observe that ‘if such is the case of a man with his wife, it is better not to marry’, with which Jesus agrees, adding,

In other words, Jesus thinks it is better to be sexless than to marry, the better to pursue the interests of God’s Kingdom. He emphasises the point in Luke 20.34-35:

This is even less ambiguous in its denigration of marriage; it is for this world only, for those who will not be part of the Kingdom, who will not survive death. Those who live in anticipation of the Kingdom, who would be resurrected from the dead, will have nothing to do with marriage in this life, as in the next. Far from ‘instituting’ marriage as Bishop Quinn claims, Jesus heralds the end of the institution.

The Kingdom, however, didn’t come when Jesus said it would. Newly formed groups of believers found themselves having to decide what to do about marriage in a world that was lasting longer than he’d promised. Consequently, ‘from the beginning’, the early church’s position was that marriage would do if believers couldn’t manage to control their sexual urges. But, Paul declares in 1 Corinthians 7.8-9, it is better to remain celibate and not to marry at all:

to the unmarried and the widows I say that it is well for them to remain unmarried as I am. But if they are not practising self-control, they should marry. For it is better to marry than to be aflame with passion.

While it is true Paul assumes any marriage will be between a man and woman, this is hardly the ringing endorsement of marriage we might expect from the assertions of today’s Christians. For Paul, the leaders of the early church and Jesus himself there was no point to marrying when they lived in the end times. As Paul says in 1 Corinthians, 7.28-29:

But if you marry, you do not sin, and if a virgin marries, she does not sin. Yet those who marry will experience distress in this life, and I would spare you that. I mean, brothers and sisters, the appointed time has grown short; from now on, let even those who have wives be as though they had none…

Paul is not sanctioning marriage because he anticipated that any marriage could only be short-lived and traumatic; as he goes on to explain in 1 Corinthians 7.32-34, marriage is little more than a distraction from ‘the affairs of the Lord’. He is not therefore promoting ‘life long’ commitment in the sense Bishop Quinn, Christian Voice’s Stephen Green and Christians who don’t know their Bible claim, because those to whom Paul writes are not, in his view, going to continue in their existing lives for very much longer.

Above all, Jesus and Paul are most definitely not establishing rules for marriage for the rest of time, simply because, for them, there was no ‘rest of time’.