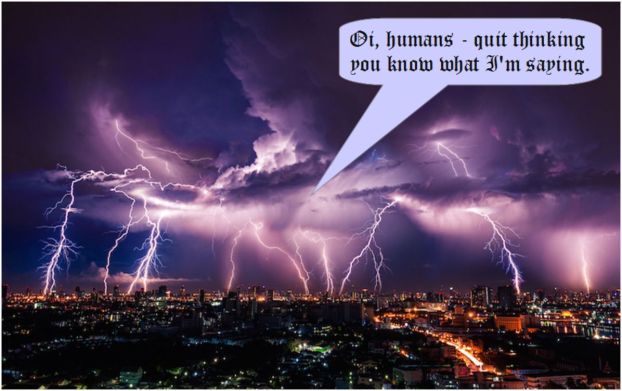 While nothing like Cyclone Idai that hit southern Africa recently, we had some terrible storms here in the north of England last weekend. The thunder woke me just after 2 a.m., each peal shaking the house, and with the flashes of lightning, it felt frighteningly apocalyptic.

And then it hit me: the Lord was sending a sign! He was angry about something we’d done! Maybe same-sex marriage, though as we’ve had that for a while now in the UK, I’d have thought he’d be used to that particular idea by now. So, maybe he was upset about abortion again. That could be it, though again, a bit late in the day. Still, with God a day is as a thousand years (and vice versa), so you never know. Maybe it’s Brexit. Perhaps the Lord’s angry we’re coming out of Europe. Or, perhaps he’s angry we aren’t coming out fast enough. Back in the 1970s, when Britain first joined the European Economic Community (as it was called then), he told his representatives here on Earth it was a Very Bad Thing, because it was like a recreation of the old Roman Empire and a sure sign of the End Times. He disapproved, but told only a few of his Chosen Ones how he felt and completely forgot to mention it to anyone else.

Christ! Don’t you just get fed up with religiously fixated nutjobs coming up with this sort of crap every time there’s a storm or a tsunami or an eclipse? Every natural disaster, every human catastrophe, every phenomenon in the night sky has to be interpreted as a message or warning from a deity who is otherwise as dumb as a rock. Only when weather does what weather is prone to do does he start communicating with us – incoherently and in code. Only a special few, those who’ve appointed themselves as his prophets and mouthpieces, are capable of telling us what he’s really saying. It’s a miracle if two or three of them ever agree about what that is.

If you need evidence there’s no God, then this is it. If he were real, we would have independent knowledge of him; knowledge that isn’t filtered through human messengers or delivered, garbled, by the weather or by a seriously flawed and obviously human book. He would be apparent; he wouldn’t need to be interpreted, explained and represented by people who give every impression of making stuff up as they go along.

What we have instead is a God who is very evidently human. It’s humans who interpret weather conditions, claim to know what God’s saying and declaim his messages and warnings. It is impossible to know anything, either about or from him, other than what humans – very often ones with very little brain and a penchant for self-promotion – tell us.

If there really were a God, I’d ask him to stop communicating with us through extreme weather, disasters and massacres, and instead to miraculously lift the curse of religion from the 7.7 billion of us here on Planet Earth. But there isn’t, so we’re stuck with it – with religion and those who have a vested interest in perpetuating its nonsense.

2 thoughts on “Interlude: A word from God”