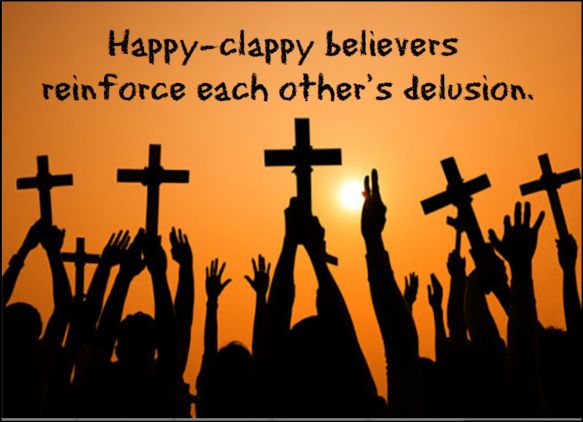 Argue with Christians (Hi there, Jim! Hi there, Don!) about the veracity of their faith and they will tell you it’s true for two reasons: the Bible and their own personal experience. ‘Christianity is true and Jesus is real because the Bible says so – and, whatsmore, I feel it.’

All of these spiritual convictions are not, as a liberal theologian like Karen Armstrong might claim, evidence that there is Something-Out-There that loves and communicates with us, but more obviously that human beings’ brains are adept at creating whatever ‘inner witness’ is required to support the beliefs and convictions they have arrived at. William Lane Craig concedes this when he acknowledges that

Anyone (or, at least any sort of theist) can claim to have a self-authenticating witness of God to the truth of his religion. But the reason you argue with them is because they really don’t: either they’ve just had some emotional experience or else they’ve misinterpreted their religious experience.

In other words, any experience of ‘self-authenticating witness’ enjoyed by believers in faiths outside Craig’s own brand of Christianity is at best mistaken, at worst fake. But then, how can anyone know, Craig included, that his own conviction isn’t just as much an emotional flush or mere subjective experience? Why is his conviction any more real than that of other kinds of believers? Ultimately, Craig can only say, “because it is”:

a person (possessed by the Holy Spirit) does not need supplementary arguments or evidence in order to know and to know with confidence that he is in fact experiencing the Spirit of God.

It is impossible for Craig, or any other Christian, to demonstrate that an entity he imagines inhabits his brain, no matter how convincing its presence may seem, has any existence anywhere other than in his brain. What the person who says ‘I believe’ is really saying is that they have no evidence at all for what they are claiming. If they had, they wouldn’t need to believe it; they would know it. They would, whatsmore, be able to point to independent, external evidence for it.

The Bible makes a virtue out of not knowing, of believing when there is no evidence.  It calls the resulting cognitive dissonance, ‘faith’.

Adapted from my book, Why Chrisitans Don’t Do What Jesus Tells Them To …And What They Believe Instead.