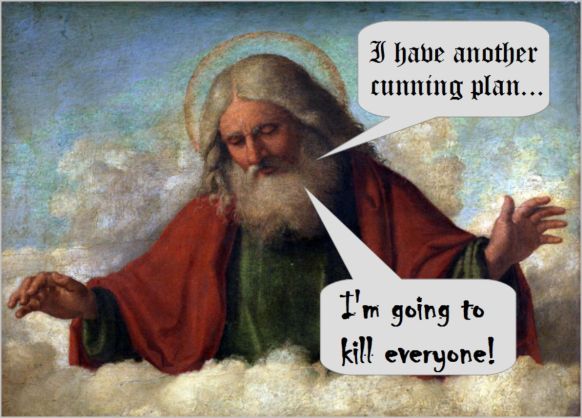 We’ve been looking at how well The God of Reason™ fares in the reasoning stakes. Is he as logical, rational and reasoned as his self-appointed representatives on Earth say he is? Is he logical, rational and reasoned at all? He didn’t do so well in the set-up, those wacky creation stories at the start of Genesis. There’s nothing reasoned or rational about his behaviour there. So how does he do further down the line? Does his intelligence evolve or does he make like Donald Trump for the rest of eternity? (Spoiler alert…)

Having willfully allowed everything to deteriorate into chaos, God is upset again when his abandoned human creation doesn’t behave as he wants them to. Evidently he couldn’t see this coming, so he decides the most rational thing to is to drown everyone and everything, with the exception of a family left over from an earlier myth by the Babylonians and a floating zoo. Everyone else, every baby, every child, every pregnant woman, every living thing – from the smallest insect on four legs to brachiosaurs and the cutest lickle kittens – he murders in cold water.

After he’s annihilated them all, Yahweh is dismayed when Noah gets pissed and romps around naked in front of his son, who is called Ken Ham (can’t blame him for not seeing that coming) and he realises this plan hasn’t worked out either. Now where, in all of these larks, is rationality? More nul points for the great God of Reason and his ability to think things through.

Yahweh’s next cunning plan involves persuading a bloke who’s a few brain cells short of a pastry case himself to murder his own son and burn his body. Yahweh tells him this will be such fun. But then, at the last minute, just when the kid is trussed up on a pyre with his old man ready to plunge the knife into him, God sends a messenger to call the whole thing off. Turns it was no more than a test. Never mind the trauma to the kid and the damage to his relationship with his father, this was the only logical way for Yahweh to see if ol’ Abe was one of the good guys.

He follows it up with another great plan; he promises he’ll look after Abe and his descendants till the end of time, so long as – wait for it – they all slice off the end of their penises. Now, come on – that’s a well thought through scheme if ever there was one.