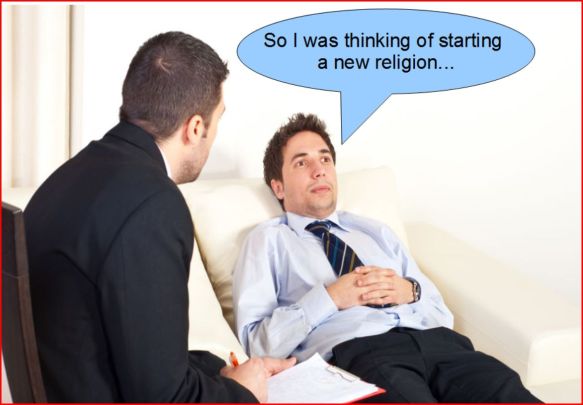 Here’s a question for you. How many first-hand, eye-witness reports do we have of the resurrection of Jesus?

Dozens? All those folk mentioned in the gospels, surely…

The answer is one. We have one first-hand, eye-witness report of the resurrected Christ. It’s St Paul’s own which he mentions, in passing, only three times. A total of six verses cover the allegedly most important event in history. Here they are:

The Gospel preached by me is not of human origin. For I did not receive it from a human being, nor was I taught it, but it came through a revelation of Jesus Christ… When he who had set me apart before I was born, and had called me through his grace, was pleased to reveal his Son in me, in order that I might preach him among the Gentiles. (Galatians 1: 11-12 & 15-16)

And that’s it. That’s Paul’s own account of his seeing the risen Lord. It hardly compares with the high drama of the Acts account, where on the road to Damascus, Paul is blinded by light and has a conversation with Jesus. But that story was written forty years after the supposed event, twenty after Paul’s death, by someone else. What’s more, it is recounted differently each time it’s told (in Acts chapters 9, 22 and 26). It’s not first-hand, it’s not eye-witness and it’s certainly not reliable.

What about the gospel accounts then? Don’t Mary Magdalene, Peter and others see the risen Jesus? Well, no, not in the earliest gospel, Mark, where, in the oldest versions, there are no resurrection appearances at all. The other three gospels have them, but these were written 50 to 90 years after Jesus lived and they contradict each other significantly. You can decide whether his makes them reliable or not, but they certainly weren’t written by the people involved, nor by eye-witnesses.

So, Paul’s account is the only first-hand report we have.

Let’s take a closer look at it.

Even in the heavily reworked versions in Acts, what Paul encounters is not a physical Jesus, a man in a resurrected body, but light from the sky and a disembodied voice, which, depending on which of the Acts account you rely on, no-one else present sees or hears. Paul himself doesn’t even know what he is experiencing – certainly not a recognisable human figure – until the light tells him ‘who’ it is.

There is no difference between Paul’s experience of a light purportedly from heaven and an event that occurred in its entirety – as far as it occurred at all – in Paul’s head. The original Greek of Galatians 1.15-16 makes absolutely clear that this is where it took place: while English translations say that the risen Christ revealed himself to Paul, the original Greek has Paul’s initial experience of the Christ take place in him. Paul, then, admits only to an inner vision of ‘a life-giving spirit’ (1 Corinthians 15.45) and nowhere does he claim that he encountered an extrinsic, embodied Jesus. Nor does the writer of Acts, however much he embroiders Paul’s experience, make the claim for him. The risen Lord, if he’s become anything, is not a resurrected body but a spiritual being made of light.

So, the only witness to the resurrected Jesus who has left us an account – six extremely sketchy verses in his letters – didn’t see the risen Jesus in physical form at all. He experienced an hallucination, or, as he puts it, a ‘revelation’. The resurrected Christ, in our earliest and only eye-witness report, is no more than a vision within a person’s head.

And from this, all else followed.