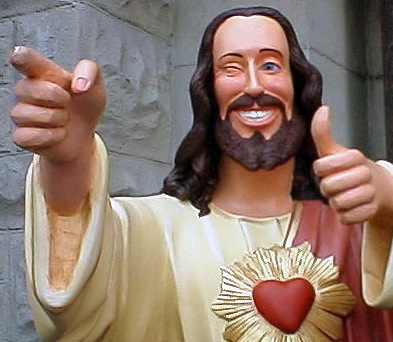 Jesus – practically perfect in every way.

Or was that Mary Poppins?

Christians go to great lengths to present Jesus as perfect. They do this by ignoring the evidence, such as we have it in the gospels, and by believing blindly in a false version of the god-man perpetrated by those who’ve gone before them. They call it ‘faith’; the rest of us know it as cognitive dissonance. Step out from behind it, look at the Biblical record without preconceptions and what you will see is that Jesus was an unmitigated disaster.

His prophecies were wrong, his promises untrue, his morality, as his followers demonstrate to this day, impossible. His mission, to herald the arrival of the Kingdom of God for the Jewish people, was a failure that led, ultimately, to untold evil being committed in his name. He was responsible for the stultification of mankind’s cultural and intellectual development, and, still today, the suppression of reason, autonomy and equality. The world would have been a better place if he had never lived, or at least if those who followed him hadn’t made a religion out of his failure. He believed that the root cause of illness was sin and demonic possession: he was uneducated and unsophisticated. He was inconsistent, unpleasant to those who opposed him and dismissive of those outside his own circle. He was arrogant, abusive and divisive.

He was, in all of this, thoroughly human. He was not God, nor the Son of God, and he was not delivering any divine salvation plan. He was a charismatic, Jewish fanatic from a superstitious backwater of the first century. He has, or should have, no more relevance to the lives of people today than any of the other itinerant preachers of the time. I say this not because I’m choosing to ‘reject’ him; in spite of the name of this blog he can no more be ‘rejected’ than other ‘divine’ figures like Mithras, Krishna and Superman. Nor do I say it because I want to revel in my own ‘sin’, as Christians assert of those of us who really don’t see what all the fuss is about. I say it because this is what the evidence shows us.

Read the synoptic gospels for yourself, ignoring the interpretive gloss invented by Paul and later Christians, and this flawed individual is the Jesus you’ll see.