Number 1. My version of Christianity is the only true version 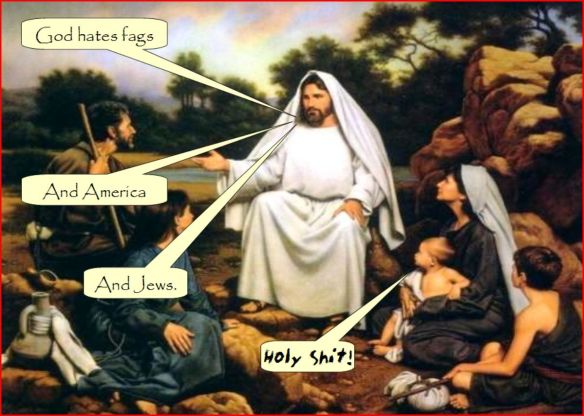 It’s very easy for the believer to convince himself that his particular set of beliefs is the Absolute Truth and that this Truth needs defending from the ‘man-centred’ philosophies and heresies that threaten his false security. He is compelled to declare to the ever-contracting walls of his make-shift reality, ‘there’s only one Truth: mine!’

There are 34,000 different, distinct churches, groups and sects within Christianity, all claiming that they alone possess the absolute Truth. Their insistence that only their doctrines are based on ‘inerrant’ scripture demonstrates just how imprecise and wide-open to interpretation ‘God’s Word’ is. Take a look at Possessing The Treasure, Apprising Ministries and Slaughter Of The Sheep for a flavour of the delicious in-fighting. And don’t forget the Westboro Baptist Church, whose repellant views I’ve added to the picture above. These are, according to the church’s website, all Biblically based.

To the outsider, all Christian groups – from evangelicals and Roman Catholics, to Methodists and Baptists – differ very little. They all believe fantastic, unsubstantiated ideas so that their arguments between themselves are no different from disputes about whether the tooth-fairy wears a pink dress or a green one. What they don’t seem to realise is that it’s irrelevant what she wears when she doesn’t exist.

The one thing that all dissenting groups do appear to agree on, however, is that the more demanding and unpalatable aspects of Jesus’ teaching should be ignored. Instead of trashing each other, Christians might set about selling all they have and giving to the poor, just like their leader told them to. That, and not petty doctrinal squabbles loosely based on books of the Bible, many of which we know to be forged, would be real Christian living.