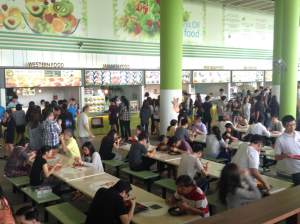 He’s over there, talking to her now. The two of them like hoodies on a street corner. She’s upset, he’s looking over at me with that look of his. The one that means, ‘I’ll get you, you evil little toad.’ What do I care what he thinks. So I answered the old cow back. If she can’t take it she shouldn’t be here.

Now he’s coming over, still trying to look like some sort of a tough guy. I make out to ignore him. What do I care.

‘Neville Fowler,’ he says. And then he sees Roy with me and says to him. ‘Roy Andrews. Get that silly grin off your face and both of you get yourselves over here. Now.’ So we do, as slow as we can, like. The silly prat doesn’t bother me and Roy.

Old Robbo curls his lip and takes his time. It’s hard not to laugh. I know if I look at Roy we will, so I don’t look at him. The sooner we get this over with the sooner we get back in the lunch queue.

‘You inconvenience a member of my staff…’

‘Inconvenience? Don’t know what you mean.‘ I say. I mean, inconvenience. Who’s he think he is?

‘You inconvenience a member of my staff, or me or, indeed, any other pupils…’

‘You inconvenience a member of my staff, me or anybody else, Mr Fowler, and I promise you, I will inconvenience you even more. You understand?’

‘Do you understand?’ he says again, like there’s one of those full stops he’s always on about between each word.

‘Then you can go and join the lunch line again,’ he says.

‘Thanks,’ I say sarcastically and Roy smirks. We walk back to the line, enjoying all the admiring glances that are coming our way. The queue’s moved on and we’re up near the front now. We push Adele Hargreaves and her mate out the way and get our place back.

‘Just a minute, Mr Fowler. What you think you’re doing?’ Robbo’s followed us over. Creepy or what?

‘Getting back in the line again, like you said. You forgot already?’

‘No, I didn’t forget,’ he says. ‘But obviously you did, when I said if you inconvenienced me or my staff, I would inconvenience you more. Your place in the queue is there,’ and he points to the end of the line, twenty people away at the far side of the room.

‘And that, Neville,’ Robbo says as we pass him, ‘is what’s called an inconvenience.’