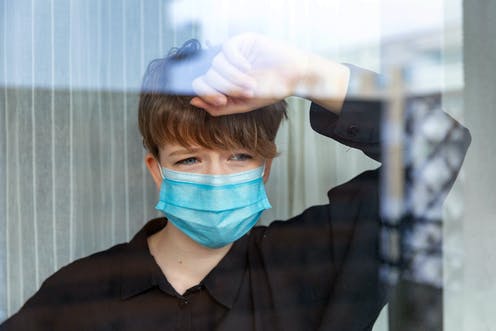 Which brings us to the measures used to combat Covid-19. What should we believe? What politicians tell us and impose on us? What the media says? It’s not as if these sources speak with one voice – though in the UK most mainstream media has parroted exactly what the government has told them. I wanted to see for myself what the evidence, all of which is linked below, actually says. This turned out to be easier said than done. Nevertheless, most of it is out there – the scientific studies, the data, the non-politicised recommendations. First, what they say about…

Lockdowns: do they work? What does the evidence tell us? Lockdowns work in the sense they relieve pressure on health services (the NHS in the UK) at a time when demand is already high, in the winter. They ‘work’ insofar as they defer the spread of Covid-19. They do not eliminate the virus and they don’t prevent deaths. Covid related deaths in the UK were at their highest during the lockdowns of spring 2020 and last winter. While in a significant number of these were elderly people in care homes, two thirds of excess deaths were among the general population. How could the virus spread so widely when everyone was confined to their homes? There appears to be no answer to this question, though this controlled study published in the Lancet replicated the same outcomes. Experts argued, of course, that the mortality rate would have been even higher if we had not been locked down. However, Sweden, which didn’t lock down at all, registered 14,626 excess deaths (0.175% of the population), higher than other Scandinavian countries but well below the totals for France, Spain, Italy and the UK, all of which locked down for extended periods of time. (I am unable to find the percentage rate for the UK. The fact the pandemic straddles two years seems to have made it impossible for statisticians to have worked out the figure.)

Countries like Australia and New Zealand where lockdowns have been used as the primary means of Covid avoidance are now in a perpetual cycle of lockdown, opening up when infections appear to have been eliminated, locking down again when any new infections are detected. New Zealand did so recently after one new case was discovered (up to 651 at time of writing). Such a reliance on (ineffective) lockdowns has resulted in a low uptake of vaccination: around 30% having had both doses in Australia, 24% in New Zealand, compared with approximately 76% in the UK and Sweden with an uptake similar to that of the U.S., 51%. There would appear to be a correlation between a reliance on lockdowns and a reluctance to take the vaccine. Australia and New Zealand are locked into this perpetual cycle: closing down areas and cities every time the virus reappears and in turn deterring vaccine uptake, making further lockdowns inevitable.

As a deference mechanism, lockdowns only work if there is a preventative measure down the line to defer to; zero Covid is unachievable and is therefore not that measure. High levels of vaccination are. The UK emerged from most lockdown measures on 19th July and although there has been an increase in Covid cases since then, most have not been serious. The diagram below demonstrates that hospitalisations remain low. This has been attributed to a high vaccine uptake; about 60% of hospitalisations are of the unvaccinated. Official figures suggest that ‘82,100 hospitalisations (have been) prevented in over-65s and almost 24 million infections prevented across England.’ 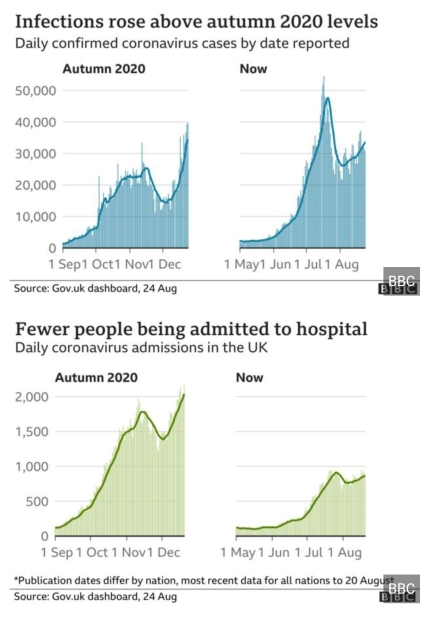 Neither do lockdowns work in terms of preventing deaths from causes other than the virus. There has been an increase in excess deaths from causes other than Covid-19 during lockdowns. Some scientists are speculating a flu epidemic in the northern hemisphere this coming winter because, thanks to Covid lockdowns, flu data has not been available from the southern hemisphere’s winter months from which to develop an effective vaccine. (Speculating is a crucial word here.)

Here in the UK, even with high vaccination rates and low hospitalisations, we fear we could be locked down this winter should the NHS become overwhelmed yet again, this time with a conjectured flu epidemic. We must, as we were told last winter, ‘protect the NHS’. Lockdowns were imposed in large part to help the mismanaged service cope, something it claims not to be able to do every year even without a pandemic. Nevertheless, last year we were persuaded the NHS was our Saviour in need of saving itself. There were even regular, socially distanced worship gatherings every Thursday evening. Yet, according to a Freedom of Information request by the Guardian newspaper during the first wave in 2020 ‘a total of 32,307 patients admitted with other conditions had contracted covid-19 while in hospital, and 8,747 (27%) died within 28 days.’ (verified by the British Medical Journal.)  The UK government has had at least 6 months to initiate reform in the NHS (and arguably a further 6 before next January’s annual crisis rolls round.) So far they have done bugger all precisely nothing.

On the basis of the evidence, the UK government cannot justify further Covid lockdowns. You can of course judge for yourself whether you think lockdowns are effective and worthwhile, even if ultimately you may well not be given any choice about being subjected to them.

2 thoughts on “What Does The Evidence Tell Us… About Lockdowns?”