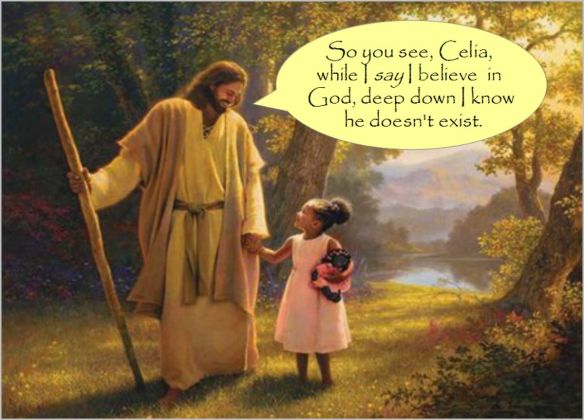 Two tried cliches trotted out by evangelising (i.e. aggressive) Christians are that ‘atheism is a religion‘ and that in their ‘heart of hearts atheists know there really is a god’. Ken Ham of Answers In Genesis is fond of both assertions, as are other equally desperate promoters of unsupportable beliefs. We’ll come to the first in a later post, but here’s how Ham expresses the second:

They (atheists) know in their hearts that God exists, but they are actively suppressing this belief in unrighteousness (Romans 1:18). They fight so hard against a God that they claim doesn’t even exist because they know that He really does! We need to pray that, instead of fighting against God, these lost individuals will repent and put their faith and trust in Christ and in what He did for them.

Romans 1.18 that he cites says: For the wrath of God is revealed from heaven against all ungodliness and wickedness of those who by their wickedness suppress the truth.

Assuming Paul is saying here what Ham claims he is (it’s doubtful from this verse alone) both he and his hero are demonstrably wrong – as they are about so much. The evidence suggests that while young children look for meaning and assume agency, they do not necessarily attribute these to a god until they are taught to do so by others. The god they then come to acknowledge is the one already prevalent in their social environment. In a predominantly Christian context, they will come to be acquainted with – and may go on to develop a full-blown belief in – the interpretation of the Christian God common within their particular culture.

It is the same for conversion generally. You are more likely to be a Mormon in Salt Lake City, a Roman Catholic in East Timor. If raised in a Jewish environment, it’s more likely you’ll subscribe to YHWH; in an Islamic one, an interpretation of Allah; Buddha – not strictly speaking a god – in a Buddhist one. Statistically, those who adopt a religion and a belief in a god, almost always opt for that which is prevalent in the society into which they are born. This is not god ‘writing a knowledge of himself’ in their hearts, it is a cultural, human phenomenon.

Ham and others see this as evidence for their belief that we all have some sort of ‘god-shaped hole‘ in our psyche that we can just as easily fill with false gods as with the real one (theirs). But this is a shift in the argument; it’s not now that God makes himself known to everyone but that we all find a need for a god. This is not the same thing, nor is it true. Certainly humans have a history of creating gods to explain the strange, magnificent and sometimes hostile universe in which we find ourselves; but this does not mean these many gods exist, as Ham would be the first to admit (c’mon, there’s only one real God – his.) It means only that the human brain seeks pattern and meaning, and has often drawn the wrong conclusions in its quest for them. The gods – and God – are part of these wrong conclusions.

And what of Ham’s assertion that atheists deny their awareness of God because of ‘unrighteousness’ – because, he implies, we just want to live a life of rampant ‘sin’? Well, I admit, I like a bit of a sin as much as the next man, but that’s not why I’m an atheist. I’m an atheist because, like most others, I find no evidence for gods or God either in my ‘heart’, nor in the way the world works nor in collections of iron age stories. Morality doesn’t come into making this assessment. In any case, those who buy into a god don’t have a monopoly on ‘righteousness’, as their weak morals, judgemental attitudes and destructive behaviour regularly demonstrate. More than this, and as Ham admits, Christians are only concerned about others because the Bible says they should be: ‘The reason I care about poverty,’ he says, ‘is because God’s Word instructs me to care, and all humans are made in the image of God as God’s Word tells me.’ This is not righteousness, nor a morality that comes from any real concern for fellow human beings.

Finally, atheists don’t, as Ham claims, ‘fight so hard against’ a non-existent God that we secretly believe in. We oppose Christians and other purveyors of supernatural nonsense when they try to impose their irrational beliefs on others, when they condemn fellow human beings, seek to control them and try to limit their rights in the name of God and the cause of ‘righteousness’.

So, no, don’t condescend, Christians, to tell us we all know that there’s a God that we wilfully ignore. You’re wrong, and I’ll show you even more reasons why you are, next time.

36 thoughts on “Christians’ Favourite Delusions 33: Atheists know in their hearts that God exists”